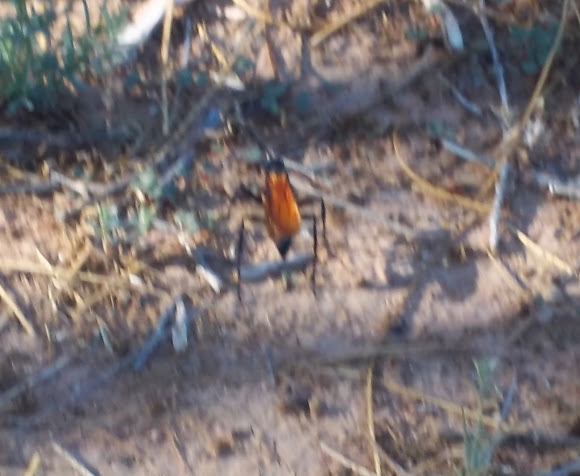 A type of spider wasp The female tarantula hawk captures, stings, and paralyzes the spider, then either drags her prey back into her own burrow or transports it to a specially prepared nest, where a single egg is laid on the spider’s abdomen, and the entrance is covered. When the wasp larva hatches, it creates a small hole in the spider's abdomen, then enters the spider's abdomen and feeds voraciously, avoiding vital organs for as long as possible to keep the spider alive. After several weeks, the larva pupates. Finally, the wasp becomes an adult, and emerges from the spider's abdomen. The wasp emerges from the nest to continue the life cycle. Tarantula wasps are also nectarivorous. The consumption of fermented fruit sometimes intoxicates them to the point that flight becomes difficult. While the wasps tend to be most active in daytime summer months, they tend to avoid the very highest temperatures. The male tarantula hawk does not hunt; instead, it feeds off the flowers of milkweeds, western soapberry trees, or mesquite trees. The male tarantula hawk has a behavior called hill-topping, where he sits atop tall plants and watches for passing females that are ready to reproduce.

Worldwide distribution of tarantula hawks includes areas from India to Southeast Asia, Africa, Australia, and the Americas. Tarantula hawk species have been observed from as far north as Salt Lake City, Utah in the United States, and south as far as Argentina in South America, with at least 250 species living in South America. Several species of tarantula hawk are found in the deserts of the southwestern United States, with Pepsis formosa and Pepsis thisbe being common. The two species are difficult to distinguish, but the majority of Pepsis formosa have metallic blue bodies and reddish antennae, which separates them from Pepsis thisbe