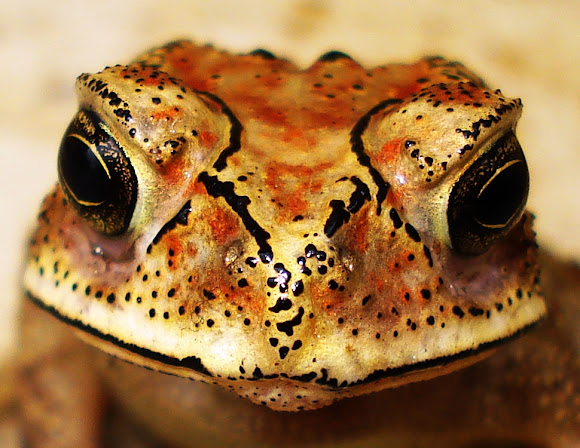 A frog commonly seen around our home. The top of the head has several bony ridges, along the edge of the snout (canthal ridge), in front of the eye (pre-orbital), above the eye (supra-orbital), behind the eye (post-orbital), and a short one between the eye and ear (orbito-tympanic); The snout is short and blunt and the space between the eyes is broader than the upper eyelid width. The ear drum or tympanum is very distinct and is at least as wide as two thirds the diameter of the eye. The first finger is often longer than the second and the toes at least half webbed. A warty tubercle is found just before the junction of the thigh and shank (sub-articular tubercle) and two moderate ones are on the shank (metatarsus). There is no skin fold along the tarsus. The "knee" (tarso-metatarsal articulation) reaches the tympanum or the eye when the hind leg is held parallel along the side of the body. The dorsal side is covered with spiny warts. The parotoids are prominent, kidney-shaped or elliptical and elongated. The dorsal side is yellowish or brownish and the spines and ridges are black. The underside is unmarked or spotted. Males have a subgular vocal sac and black pads on the inner fingers that help in holding the female during copulation

Asian common toads occur widely from northern Pakistan through Nepal, Bangladesh, India including the Andaman and Nicobar Islands, Sri Lanka, Myanmar, Thailand, Laos, Vietnam, Cambodia and southern China, Taiwan, Hong Kong and Macau to Malaysia, Singapore, and the Indonesian islands of Sumatra, Java, Borneo, Anambas and Natuna Islands. They were introduced to the islands of Bali, Sulawesi, Ambon and Manokwari, and the northeastern portion of the Vogelkop Peninsula in New Guinea. They have been recorded from sea level up to 1,800 m (5,900 ft) altitude, and live mostly in disturbed lowland habitats, from upper beaches and riverbanks to human-dominated agricultural and urban areas. They are uncommon in closed forests

The first picture really caught my attention. I haven't seen anyone take a portrait of an American Toad before