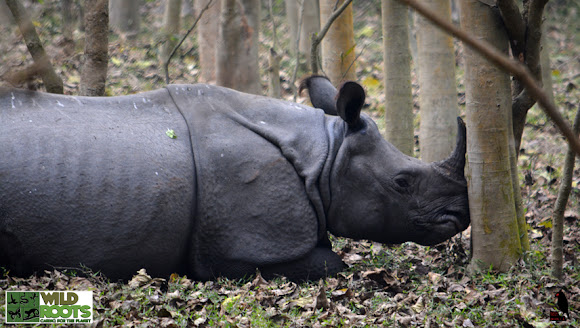 The Indian rhinoceros (Rhinoceros unicornis), also called the greater one-horned rhinoceros and Indian one-horned rhinoceros, belongs to the Rhinocerotidae family. Listed as a vulnerable species, the large mammal is primarily found in north-eastern India's Assam and in protected areas in the Terai of Nepal, where populations are confined to the riverine grasslands in the foothills of the Himalayas.

Found in the grasslands of the Pabitora Wild life Sanctuary in Guwahati, Assam, India.

This One horned Rhino was spotted at the Pabitora Wildlife Sanctuary in Assam, North East India. "I love my tree...don't ever think of cutting it down"....as if the Rhino was saying this.....as it rested its horn against the trunk of the tree.

What a photo! Well done Biswajit De. Thank you for adding it to the Rhinos of the World mission, this extremely rare rhino is very welcome and I hope you can share many more images of it!

Wonderful and precious spotting Biswajit De! A couple of tips for you:
- on project Noah we ask that in the Habitat field you describe the habitat where you saw your spotting, rather than provide generic habitat information (this can be provided in links under Reference or in the notes); see http://www.projectnoah.org/faq
- the Signs of Wildlife mission is for spottings such as tracks, nests, bones, etc, where the living organism itself isn't actually seen.
Thanks again for this wonderful sighting!