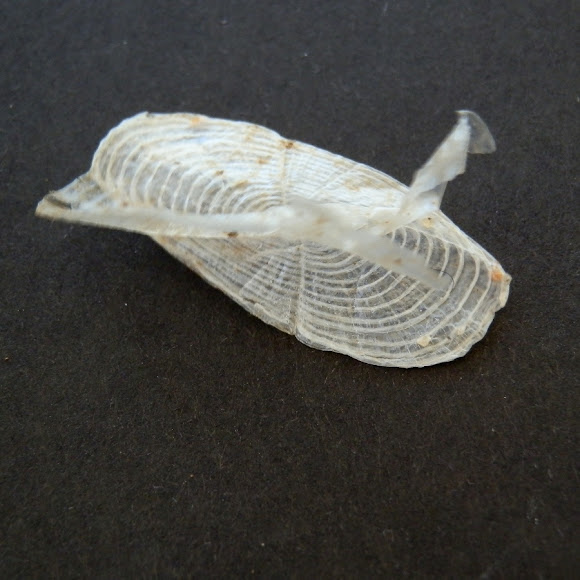 These are the dried chitinous remains of the float of a hydroid colony. Velella's float seen here has a flat oval base (pic # 1) with a stiff triangular sail along its longer axis but set slightly at an angle to the left. The base has concentric rings. The whole base was about 20mm long with a sail about 15 mm high.Pic #4 shows the underside (oral) of the float.

These were spotted washed up in the hundreds along the beach, tangled-up in long strands of sea weed, perhaps after a storm surge. The area was around the mouth of the Powlett River in Victoria which opens into Bass Strait.

Each individual Velella is a hydroid colony .The carnivorous colony drifts in the pleuston, with part of its body -the float and sail -above water and the colony of hydroids, which have polyps that have either a protective function or a reproductive one, below the water surface. Here's some interesting information about the placement of the sail - Richard Fox of Lander University (2007) wrote: "Velella is a passive sailor that travels where wind and currents take it. Individuals have sails angled oblique to the long axis (Fig 2) but are either right or left-handed. In half the population the sail is rotated to the right of the longitudinal axis and in the other half it is to the left. The wind thus will blow half of a mixed population in one direction and the other half in another, thereby sorting it so that the entire population is not blown ashore, at least not by moderate winds. Strong winds blow all individuals in the same direction. Wind tunnel studies have shown that the design of the sail maximizes stability and seaworthiness at the expense of performance. Velella is a zooplanktivore feeding on fish larvae, fish eggs, copepods, crustacean larvae, and appendicularians. It has gastrodermal zooxanthellae, which presumably contribute to its nutrition. Velella is itself consumed by other members of the pleuston, namely the snail,Janthina, and the nudibranch, Glaucus. In life Velella is the beautiful deep blue of the open ocean but preserved it is colorless. Janthina janthina, Porpita porpita, andGlaucus atlanticus share this blue color. Velella, Porpita, Glaucus, and Janthina all have gas-filled bladders of some type and use them to maintain positive buoyancy and assure their position in the pleuston. Velella’s cnidocytes, although equipped with toxin, are generally incapable of penetrating human skin although some observers have reported irritation of sensitive areas such as the eyes or tongue." Unfortunately, i could not see any live ones - maybe next time. Also, I note that the Bass Strait waters must be relatively warm, compared to the Indian Ocean, to have these tiny creatures in such large numbers. For a lovely live version of this cnidarian here's EntreAquas' spotting http://www.projectnoah.org/spottings/108...

Thanks Antonio - I hope to see a live or fresh one one day, somewhere up North. These seas are too cold for live ones, I think. As a student, many many years ago, I got a few specimens but I remember them as being small and almost black - that 's from the Indian ocean.

Perfect for ladies to wear to the horse races.

Amazing creatures and great information -- thanks!