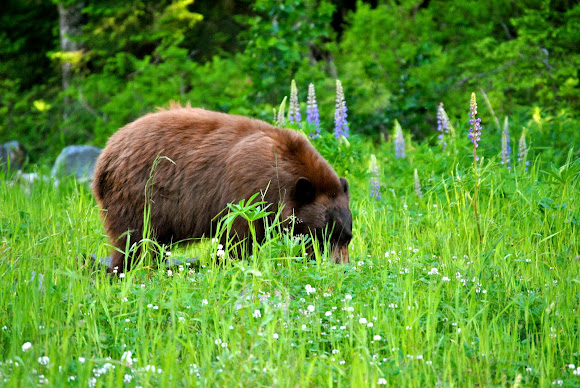 A medium-sized bear native to North America. It is the continent's smallest and most common bear species. The skulls of American black bears are broad, with narrow muzzles and large jaw hinges. Females tend to have more slender and pointed faces than males. The claws are short and rounded, being thick at the base and tapering to a point. The ears are small and rounded, and are set well back on the head. Black bears are highly dexterous, being capable of opening screw-top jars and manipulating door latches. They also have great physical strength. Even bear cubs have been known to turn over flat-shaped rocks weighing 310 to 325 pounds (140 to 147 kg) by flipping them over with a single foreleg. Black bear weight tends to vary according to age, sex, health, and season. Seasonal variation in weight is very pronounced: in autumn, their pre-den weight tends to be 30% higher than in spring, when black bears emerge from their dens. Black bears on the East Coast tend to be heavier on average than those on the West Coast. Adult males typically weigh between 57–250 kg (130–550 lb), while females weigh 33% less at 41–170 kg (90–370 lb).[32] Adults have a typical size range of 120–200 cm (47–79 in) in length, and 70–105 cm (28–41 in) in shoulder height. The tail is 7.7–17.7 cm (3.0–7.0 in) long. Although they are the smallest species in North America, large males exceed the size of other bear species except the Brown and Polar Bears. The fur is soft, with dense underfur and long, coarse, thick guard hairs. The fur is not as shaggy or coarse as that of brown bears. Despite their name, black bears show a great deal of color variation. Individual coat colors can range from white, blond, cinnamon, or light brown to dark chocolate brown or to jet black, with many intermediate variations existing. Bluish tinged black bears occur along a portion of coastal Alaska and British Columbia. White to cream colored black bears occur in coastal islands and the adjacent mainland of south-western British Columbia. Albino specimens have also been recorded. Black coats tend to predominate in moist areas such as New England, New York, Tennessee, Michigan and western Washington. 70% of all black bears are black, though only 50% of black bears in the Rocky Mountains are black.

Native to North America. They typically live in largely forested areas, but do leave forests in search of food. Sometimes they become attracted to human communities because of the immediate availability of food.

Black bears are omnivores with their diets varying greatly depending on season and location. The American black bear is listed by the IUCN as Least Concern, due to the species' widespread distribution and a large global population estimated to be twice that of all other bear species combined. Along with the brown bear, it is one of only two of the eight modern bear species not considered globally threatened with extinction by the IUCN. American black bears often mark trees using their teeth and claws as a form of communication with other bears, a behavior common to many species of bears. Although they all live in North America, American black bears are not closely related to brown bears and polar bears; genetic studies reveal that they split from a common ancestor 5.05 mya. Both American and Asiatic black bears are considered sister taxa, and are more closely related to each other than to other species of bear. Spotted along Callaghan Road in Whistler, British Columbia.

I have never seen one so light colored. These are great photos!

What an interesting drive that must have been! Nice you had your camera along to get those spottings!

My boyfriend and I live in Whistler BC, and we decided to go for a drive as the sun was going down. Just off of a main road in the area. We saw a total of 5 bears on the drive, all on that same strip of road!

Nice spotting - where did you see it?

in a field of lupine.