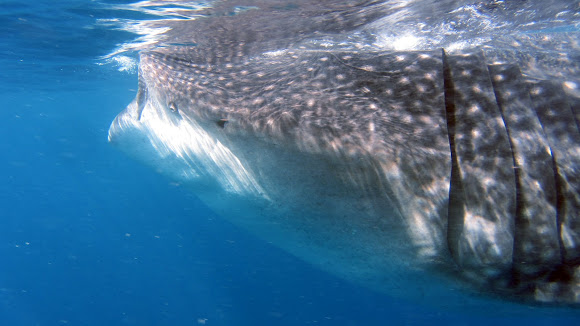 Photo taken open sea near Isla Mujeres Mexico. Second expedition of the season, this beauty just swim slow filtering plankton :) Is a slow-moving filter feeding shark and the largest extant fish species. The largest confirmed individual had a length of 12.65 mt and a weight of more than 21.5 tonnes , and there are unconfirmed reports of considerably larger whale sharks. Claims of individuals over 14 mt long and weighing at least 30 tonnes are not uncommon.

Another epic day around 30 sharks in the area water star to get clear nut ther was allot of plankton i have a great videos as well :):):)

Thanks Blogie just a good visibility day make the difference :)

Thanks Cindy and ASH another incredible day :)

Me too Sergio is one most amazing creature i ever seen is a especial feeling when you have in front :)

I just love these critters!!!