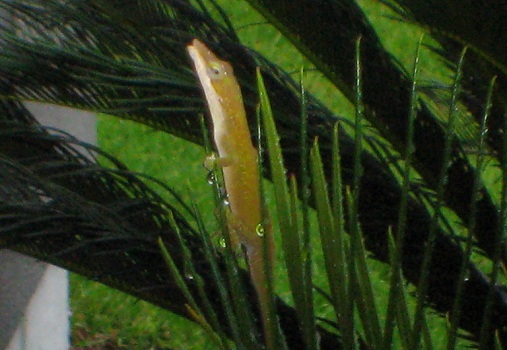 The typical coloration for a green anole ranges from the richest and brightest of greens to the darkest of browns, with little variation in between. The color spectrum is a resultant of three layers of pigment cells or chromatophores: the xanthophores, responsible for the yellow pigmentation; cyanophores, responsible for the blue pigmentation, and melanophores, responsible for the brown and black pigmentation when the anole is cold or stressed. They are 5 - 8 in (12 - 20 cm). May be either green or brown depending on environmental conditions. When brown, may have faint markings on the back. Males have a pinkish throat fan that is displayed in territorial rivalries or when approaching a potential mate. The green anole is most easily distinguished form the similar brown anole (Anolis sagrei) by green or lightly patterned brown coloration, pinkish throat fan, and by range. There are a few exceptions which are caused when a lack in one of the pigment genes occurs. These color mutations are also called phases. The rare blue-phased green anole lacks xanthophores which results in a blue, rather red, often baby or pastel blue, anole. These specimens have become a recent popularity in the trade market. When the anole is completely lacking xanthophores it is said to be axanthic and the animal will have a completely pastel or baby-blue hue. They are extremely rare—usually produced in 1 out of every 20,000 individual anoles in the wild. Another 'phase' is the yellow-phased green anole, which lacks cyanophores. Colonies of these rare color-phased anoles have been reported, but anoles with these color mutations rarely live for long, since the green color provides camouflage for hunting down prey as well as hiding from predators.

The green anole is a common lizard throughout Georgia and South Carolina, but is absent from some areas in the mountains. Anoles are generally arboreal (living in trees) but can be found almost anywhere. Anoles are commonly found in suburban or even urban areas and can often be seen perched on fences and rooftops.