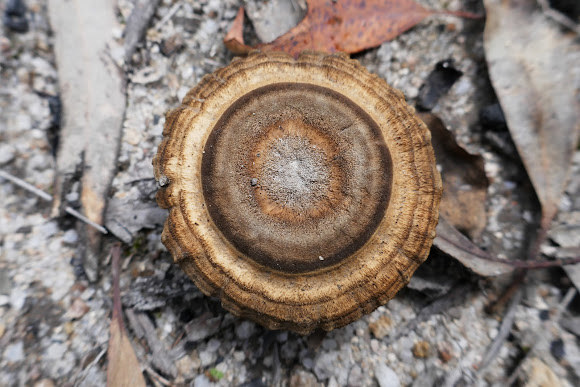 Coltricia cinnamomea, commonly known as "tiger's eye", is a stemmed polypore species in the family Hymenochaetaceae. This appears to be an aged specimen, having lost much of the sheen and vivid reddish colouring you'd see on younger specimens. Overall texture was very hard and rigid. Cap was about 5 cm in diameter, tan brown colour, and concentrically zoned with matted fibers. Generally flat cap that was 'slightly' centrally depressed, margin was thin and wavy. Cream-coloured pores that were small and angular (last photo), and stipe central to the cap. NB: Coltricia perennis and C. australica appear to be synonyms for C. cinnamomea. Also, the common names "tiger's eye" and "brown funnel" are names used abroad for fungi of the same genus Coltricia. I'm unable to find a local name.

Spotted along the Peak Trail in Girraween National Park. Dry sclerophyll forest with sandy granite soils, substantial undergrowth and accumulated leaf litter, and foliage much greener and lush since the drought has broken. Well-shaded area along this section of track, and some areas were still damp and muddy from recent rain. Here's some park info - http://www.rymich.com/girraween/ https://en.wikipedia.org/wiki/Girraween_...

https://mushroomobserver.org/name/show_n... https://apps.des.qld.gov.au/species-sear... Synonyms for Coltricia cinnamomea.... http://www.mycobank.org/name/Coltricia%2... I chose Coltricia cinnamomea as the spotting ID simply because it is the only species of Coltricia that has been documented in this national park (rymich wbsite). A member of the Australia & New Zealand Fungus Identification Group on Facebook confirmed that Coltricia was the correct genus.