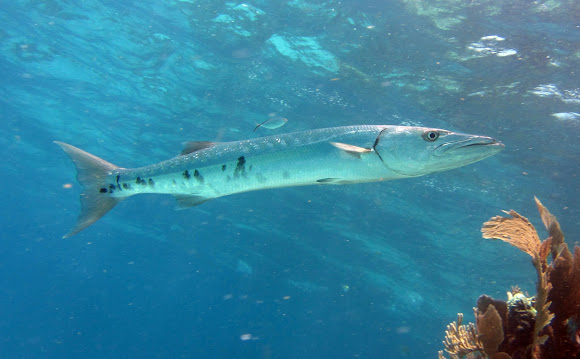 Photo take at -35 ft on a coral reef. this is a big one about 90 cm long.Has a long, streamlined body with the second dorsal fin set far back near the tail. This fin arrangement, along with a large, powerful tail, allows it to stalk its prey and then accelerate forward at great speed.re elongated fish with powerful jaws. The lower jaw of the large mouth juts out beyond the upper. Barracudas possess strong, fang-like teeth that are unequal in size and set in sockets in the jaws and on the roof of the mouth. The head is quite large and is pointed and pike-like in appearance. The gill-covers do not have spines and are covered with small scales. The two dorsal fins are widely separated, with the first having five spines and the second having one spine and nine soft rays. The second dorsal fin equals the anal fin in size and is situated more or less above it. The lateral line is prominent and extends straight from head to tail. The spinous dorsal fin is situated above the pelvis. The hind end of the caudal fin is forked or concave, and it is set at the end of a stout peduncle. The pectoral fins are placed low down on the sides. The barracuda has a large swim bladder.

In the Atlantic coast of tropical America from North Carolina , Gulf of México all the Caribbean to Brazil found on shallow waters on coral reef and open sea grass areas it can be spot in groups and also alone ones like this one. Wikipedia.