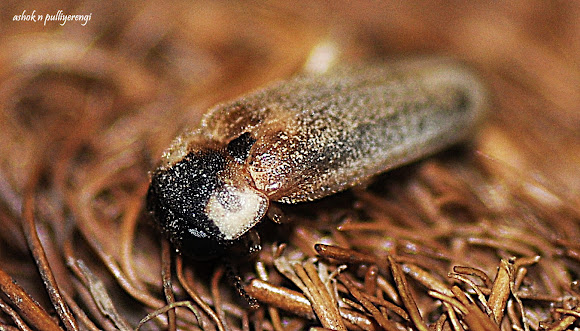 In the early evening, flashing lights can often be seen cruising around in the forest. These are the little lanterns on the underside of the abdomen of a carnivorous beetle of the family Lampyridae. These beetles have been misnamed fireflies. It is believed that the flashing light is used by males and females to attract each other. The light is created by an enzyme (luciferase) which reacts with other chemicals in the insect's body to produce light energy. The firefly regulates the emmission of light by controlling the amount of air supplied to the cells. The regularity and intensity of the flashing may help fireflies identify males and females. Both the firefly larvae and wingless females can also be also known as glow worms. The larvae of the firefly has a flat, segmented body resembling a kind of serrated flatworm. This larvae has two little 'windows' at the back end of the body through which a pale green glow is seen. Why the larvae also glows is unknown. (The ability of plants, fungi or animals to "glow" is called bioluminescence.)