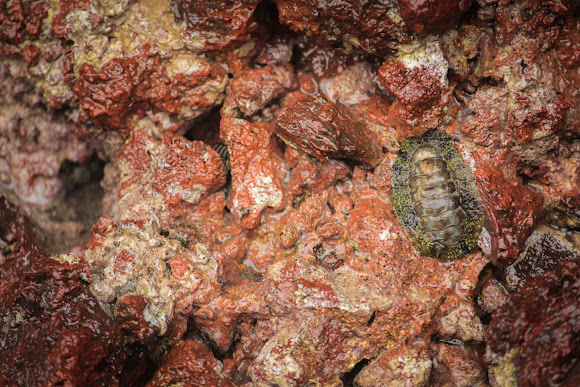 When I first spotted this on some coastal rock, I thought it was a fossil, a trilobite even. As I did more research, I found out that many people have been fooled by this trilobite impostor. This is a type of mollusk with segmented shell in the class Polyplacophora.

Quote from http://www.trilobites.info/triloimposter... "Chitons are relative common, though largely unnoticed occupants of the intertidal zone on most of the world's shores. Their distinctive feature is a shell composed of separate armored plates, which on first glance, strongly suggest the repeated segments of an arthropod, such as a trilobite. They can range from relative dull browns, greys, and greens (such as the specimens at right), through very attractive, bright colors (as shown by some of the specimens below). Of course, examining the underside of a chiton would revel a broad, muscular snail's foot, not the numerous, jointed walking legs of an arthropod. So, although a chiton might at first resemble an eyeless nileid trilobite, it would soon be revealed as a mollusk on closer examination."

Saint Vincent and the Grenadines