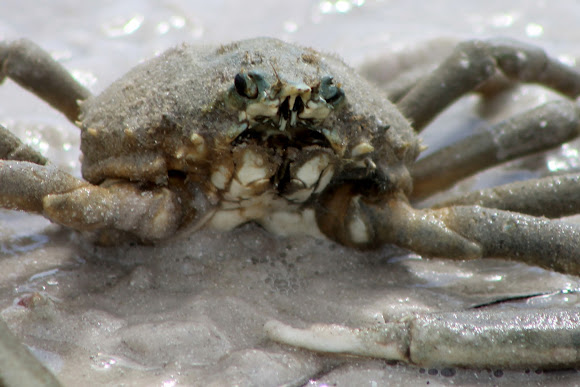 Libinia dubia belongs to a group of brachyuran crabs commonly referred to as decorator crabs. Using hooked, Velcro-like setae on the surface of the carapace, the crabs attach bits of algae and invertebrates for camouflage. This behavior is most common in juveniles, and the shells of adult crabs are usually found clean. Under the decorative covering, the carapace of L. dubia is rounded, bearing approximately six spines down either side and along the median line on the dorsal surface (eg. Corrington 1927). A forked rostrum extends between the eyes, and the overall color of the body is yellowish to brown (Voss 1980). Long, thin walking legs originating from the rounded body give the crab the spidery appearance for which it is named. These legs culminate in curved points, allowing the crab to cling to various surfaces like rocks and jellyfishes (Ruppert & Fox 1988).

II . HABITAT & DISTRIBUTION Regional Occurrence: The longnose spider crab is found in a variety of coastal and estuarine habitats to approximately 50 m depth (Williams 1984). The native range of L. dubia extends from Cape Cod to southern Texas, Bahamas and Cuba. However, in the past decade the species has been reported in the Mediterranean Sea off the Tunisian coast (Enzenross & Enzenross 2000), although the exact date and vector of introduction is unknown. In Florida, L. dubia has been documented as a common inhabitant of Florida Bay (Tabb & Manning 1961), and the most prevalent spider crab in Tampa Bay (Dragovich & Kelly 1964). IRL Distribution: Both adult and juvenile L. dubia are found throughout the Indian River Lagoon. Juveniles are common in seagrass beds, and adults may inhabit more open sandy-bottom areas. Juvenile crabs can also be found attached to the cannonball jelly, Stomolophus meleagris, which occurs seasonally along the coast and throughout the IRL (Tunberg & Reed 2004).

Three species of Libinia inhabit the coastal and estuarine waters of the Western Atlantic and Caribbean Oceans: L. dubia; the portly spider crab, L. emarginata; and the seagrass spider crab, L. erinacea. The color and shape of all species are similar, and discrimination between juvenile specimens can be difficult. However, Libinia dubia and L. emarginata are distinguished by the number of dorsal median spines, bearing six and nine, respectively (Abele & Kim 1986). The maximum size of the portly spider crab is also slightly larger than that of L. dubia (Ruppert & Fox 1988). The rostrum of young seagrass spider crabs forks more deeply than L. dubia, and the horns curve toward one another (Abele & Kim 1986).

Thanks, Its always a treat when we spot these guys