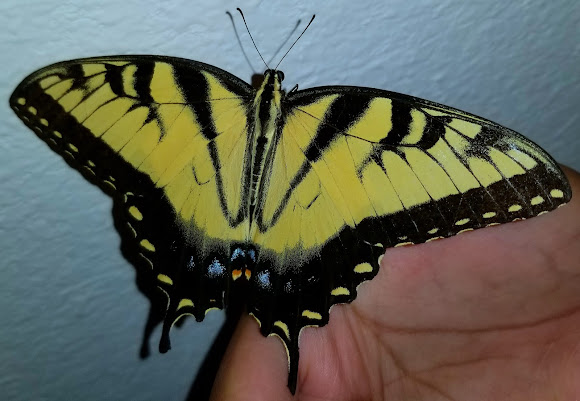 It is a large swallowtail butterfly in the genus (Papilionidae). It has a yellow body, head and thorax with a black stripe running down it. The wings have a black border with yellow spots and the hindwing end has two orange spots and blue patching. The inner part of the wings have yellow scaling and four distinct black stripes. The veins are also black especially the costa vein that runs at the top of both forewings, it is also the strongest part of the wings. This one was a male specimen, because of the 2 blue spots while females have seven.

Suburban, Fort Worth, Texas. Found flying in the evening feeding on some wildflowers. They fly around this time here.

This species is found in the eastern United States from southern Vermont to Florida west to eastern Texas and the Great Plains. The wingspan was about 5 inches with a large surface area of 4 inches, though it is not the largest in Texas.

Thank you Tukup. It is one of the best here in North America.

One of the more beautiful of the butterflies in my opinion. Thanks Ornithoptera.

Watson5 a year ago

Amazing catch with the camera. I keep hoping one will hold still long enough for me to get a picture of one of these beautiful butterflies! Thank you for sharing this picture with us.