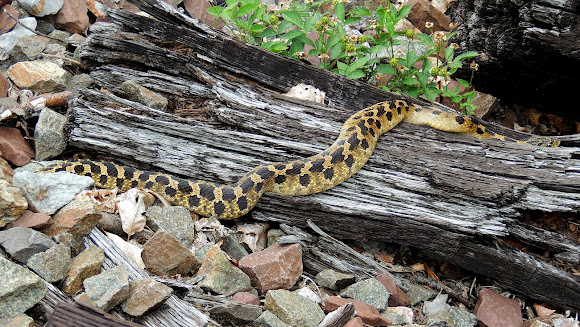 A stout snake with an upturned snout that is variable in color and pattern. Hog-nosed snakes are famed for their defensive display, flattening out and hooding, and eventually feigning death. Hog-nosed Snakes are rear fanged colubrids that are widely considered non-venomous, but can deliver a mild toxin that is not considered harmful to humans.

Rocky wooded hillside above a river in Pennsylvania's mountainous region.

Snake feigned death when approached. It was observed until eventually turning upright and slithering off into the shrubbery.

Love the colors on this one! And I like how you can see how chubby she is in the last photo :)