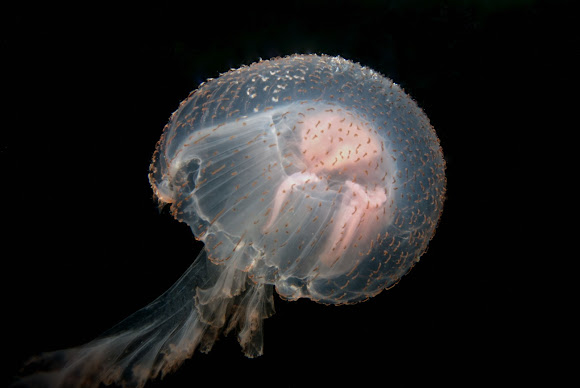 Pelagia noctiluca (Forsskal, 1775) is a jellyfish in the family Pelagiidae. In Latin, Pelagia means "of the sea", nocti stands for night and luca means light thus Pelagia noctiluca can be described as a marine organism with the ability to glow in the dark. Up to 10cm. Has a deep bell with pink or mauve warts, 16 marginal lobes and eight marginal, hair-like tentacles. Manubrium bears four longer frilled arms with tiny pink spots.

This species of jellyfish commonly known as the mauve stinger in Europe, amongst many other common names, is widely distributed in all warm and temperate waters of the world's oceans, including the Mediterranean Sea, Red Sea and Atlantic Ocean. It is also found in the Pacific Ocean, with sightings in warm waters off Hawaii, southern California and Mexico, as well as other Pacific locations.

Thanks, @Daniele for featuring this Spotting for Jellyfish Day!

Thanks too @Sukanya and @Larry :)

Congratulations Albert! This beautiful spotting was chosen to illustrate our post on Jellyfish Day! "Today is Jellyfish Day! Organisms that have roamed the seas for more than 600 million years deserve a special day. Jellyfish or jellies (Kingdom: Animalia; Phylum: Cnidaria; Subphylum: Medusozoa) are free-swimming marine organisms typically made of a gelatinous umbrella-shaped bell and trailing tentacles. The word jellyfish is a misnomer, as jellyfish are not true fish (true fish are vertebrates, unlike jellyfish). Jellyfish are a source of food for many other species, and are an important health indicator for marine ecosystems.

Jellyfish come in all sizes, shapes and colors, and often with wonderfully descriptive common names: lion’s mane, compass, blue, mauve, even by-the-wind sailor. Yes, some of them do sting!

You can celebrate Jellyfish Day by visiting Project Noah and marveling at our worldwide collection of jellyfish:
http://www.projectnoah.org/organisms?sea...