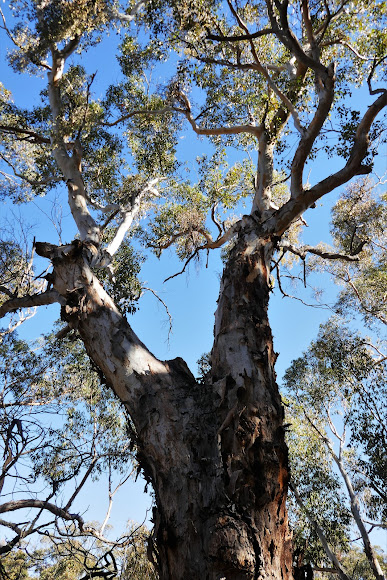 This species has the most insane bark of any eucalypt I've ever seen, and the variation between individual trees is considerable. Eucalyptus deanei, also commonly known as "round-leaved gum" and "Deane's gum", is a species of large eucalypt endemic in New South Wales. (This bit made me laugh)... It has smooth bark... (look at the photos, although they redeem themselves here)... The trunk has smooth pale grey or cream bark with a 'skirt' of rougher greyish or brownish bark at the base. These trees usually grow straight and can reach a height of 65 metres (213 ft), although some specimens have been known to exceed 75 metres (246 ft). Lance-shaped leaves that are paler on the lower surface, flower buds in groups of seven to eleven, white flowers and cup-shaped to bell-shaped fruit. (Wikipedia) My ID for this spotting finally came from images of the leaves and seed pods. This is a very handsome species, and now one of my favourite eucalypts.

Spotted in the Torrington State Conservation Area, in the New England district of northern NSW. Open eucalypt forest. The area is still very dry due to the prevailing drought.

The species is found in two disjunct populations. The southern range is from Thirlmere to Broke, near Singleton, while the northern range is from Armidale on the Northern Tablelands through to the D'aguilar Range west of Brisbane. It is a dominant tree of tall forests in sheltered valleys where there is plenty of moisture, on clay or loam soils, and alluvial sands, although it sometimes grows on more elevated areas.... In 1990 Lawrie Johnson and Ken Hill described the New England population as a separate species, E. brunnea, but the change has not been accepted by the Australian Plant Census. (Wikipedia) That explains the synonym E. brunnea and its common name "brown gum".