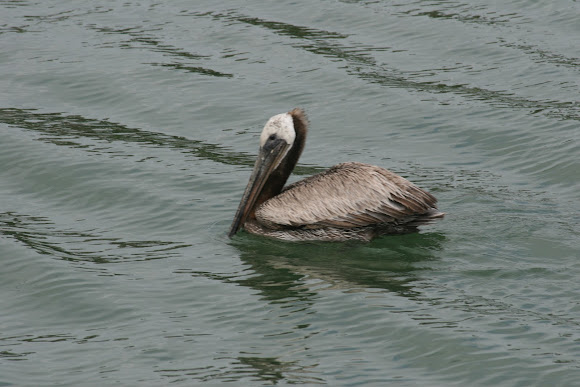 The brown pelican's image adorns postage stamps across the Americas, from Bermuda and Belize to Venezuela and St. Vincent and the Grenadines. It is Louisiana's state bird and the national bird for Turks and Caicos Islands. With its dark plumage and distinct feeding methods, the brown pelican sets itself apart from seven other pelican species. Aside from being one of the smaller pelican species, the brown pelican is the only one that is known to dive and dine. Most pelican species feed by corralling fish into shallow waters through a group chase before scooping them up with their large beaks. Brown pelicans have their own distinct method: once they spot light reflecting off the scales of fish, they plunge into the water from heights of up to 70 feet where they scoop up fish, drain water through their beaks and tip their heads back to swallow (MarineBio.org: Brown Pelican, Pelecanus occidentalis, 2010 ). Air sacs beneath their skin protect them from injury when they hit the water.

This species inhabits shallow inshore waters, estuaries and bays, avoiding the open sea. Its diet is comprised mostly of fish, causing great congregations in areas with abundant prey. Prey species include sardines and anchovies, but has been seem to take shrimps and carrion, and even nestling egrets. It regularly feeds by plunge-diving and is often the victim of kleptoparasites. The timing of breeding varies depending on latitude, breeding in spring in the extreme north of its range compared to all year round in the tropics. Brown Pelicans are colonial, with some colonies being maintained over several years. It mostly nests on the ground, sometimes on cliffs and less often in small trees or bushes. Movements and migrations depend on local conditions (e.g. northern populations migrate south) (del Hoyo et al. 1992).

In Ventura Harbor, near many boats and people.

:) I'm the same way! As long as you mention where you got it from in the notes, it's not a problem for anyone!
Take care, Jen

Thank you SO much for your help. I always worry about plagiarizing, but I figure that most of the time, others can say it better than I! =)

Hi Jen, yes they definitely show. I was on my iPhone and I may just have missed it. My apologies!
I often times quote references to show interesting facts I didn't know. When I do, I'll put quotations around the quotes and mention the reference (ex. IUCN)

You're doing great and I really enjoy your spottings! Can't wait to see the next one :)

Thank you, maybe you can help me figure that out. On my page, it shows that I have two references listed for this photo. Does it not show that on yours? Do you know how to make it show up? I've just been copying and pasting from the IUCN for most of these.

Hi Jen, again, great information. If you're quoting a reference, be sure to mention which site/book so no one gets in trouble. If it's a website, you can include the web address in the provided box when creating your spotting.