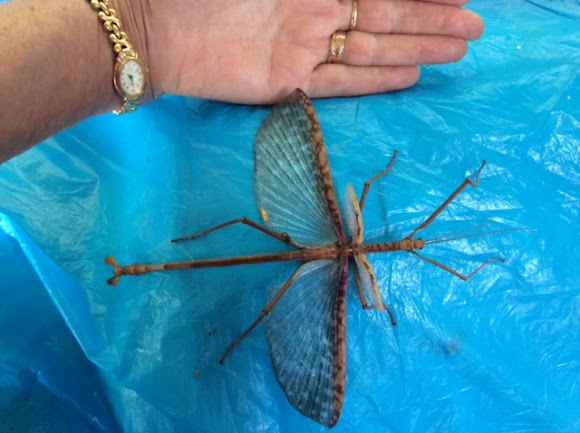 Titan Stick Insect – Acrophylla titan, also know as the Great Brown Phasma, the Titan is long, brown and resembles a large stick. With a body length of around 22-27cm, the Titan is considered Australia’s longest stick insect.

Found dead in a friends pool in the morning. She sent it to me to try and get an ID.

Is it a Titan watch Adarsha? Hahaha!

Is that Titan Watch! A sweet co-incidence :)

It is awesome series.

thanks Leana. Wish I had seen it, but it was sent to me by a friend to try and ID!. The amazing PN team had it ID'd in the blink of an eye, and stho002 supplied a great link also.

thanks Juan. Thought it might be a stick insect, but I've never seen one with its wings open.

What an improbable-looking insect ... looks like someone made it up.

This is a Stick Insect (Phasmatodea)