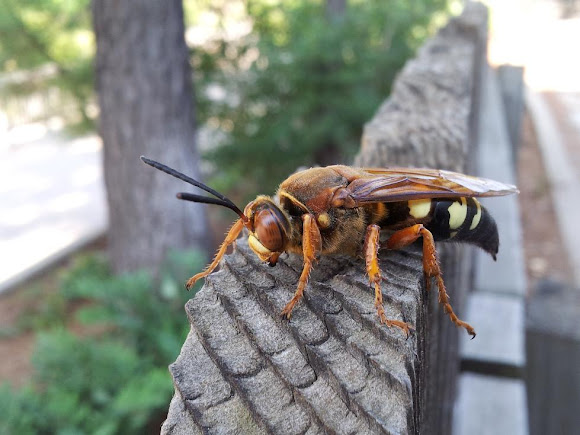 Adult eastern cicada killer wasps are large, 1.5 to 5.0 centimeters (0.6 to 2.0 in) long, robust wasps with hairy, reddish and black areas on the thorax (middle part), and are black to reddish brown marked with light yellow stripes on the abdominal (rear) segments. The wings are brownish. Coloration superficially resembles that of some yellowjacket and hornet species. The females are somewhat larger than the males, and both are among the largest wasps seen in the Eastern United States, their unusual size giving them a uniquely fearsome appearance. European hornets (Vespa crabro) are often mistaken for Eastern cicada killers. (information from Wikipedia)

This wasp was found inside a building and I took her back out to be released. She sat on the fence for a short while and eventually flew away.

No worries! Just add it to the "Hymenoptera of the World" mission instead.

Hmm... I guess I didn't move it. I swear I went through and took mine out of the mission. Oops! :-D


As for Colorado, my mother is trying to get us there this spring. It might happen! (I'll keep you in the loop)

I just removed it, since I have the power to edit. Yeah, I know that the admins let images already placed in the original mission to stand, but I don't want to spread misinformation or create confusion, either. Meanwhile, please come to Colorado and take pictures!

Hi, Eric! I cleared this one out when the change was made, and I don't see it on my end as showing in your mission any longer. I don't know why it's showing up for you. :-/ (puzzled look)

My apologies: Administrators have changed "Wasps of the World" to a local mission. Please consider adding to this one: http://www.projectnoah.org/missions/9004..., "Hymenoptera of the World." Thank you.

Thanks, all. :-) All photos were taken with my cell phone camera. I was pleased with how they turned out.