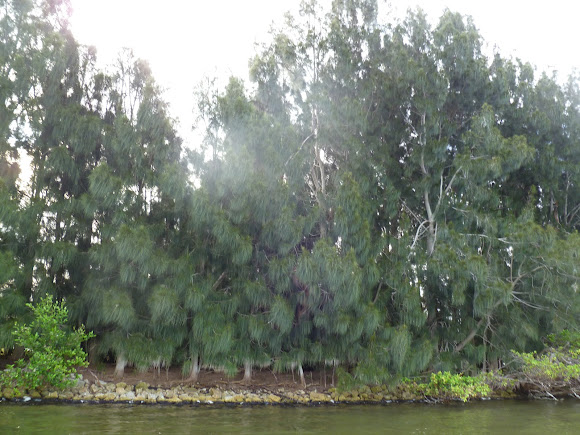 Australian pine is not a true pine tree. This evergreen tree that can grow as tall as 150 feet. It has a single trunk with reddish brown to gray bark that is rough, brittle, and peeling. Australian pine has what appear to be long, soft, gray/green needles but these "needles" are actually multi-jointed branchlets. Its flowers are small and inconspicuous. The female flowers are cylindrical to almost round cone-like clusters less than 1 inch long; male flowers are small terminal spikes, 0.5 inch wide. The fruit has a tiny, 1-seeded, winged nutlet contained in the cone.

Australian Pine is highly salt- and drought-tolerant and is invasive to Florida. It will tolerate many adverse conditions like dry or wet soil, heat and high winds. Often seen in coastal areas because it tolerates salt spray and poor beach soil.

The Australian pine was popular for use in erosion control, windbreak and landscaping but is now outlawed in many parts of Florida due to its invasive nature. The tree gives off a distinctive, soft whistle when winds are strong. The quick growing thick canopy of leaves creates an impenetrable shade and forces out other competing native plants. Most Australian Pines grow in thick groves with a heavy layer of leaves beneath them and almost void of any other plant species. There is a low diversity of wildlife in these groves because of the lack of available food. Many parks and preserves have programs to remove Australian Pines and replant native species.