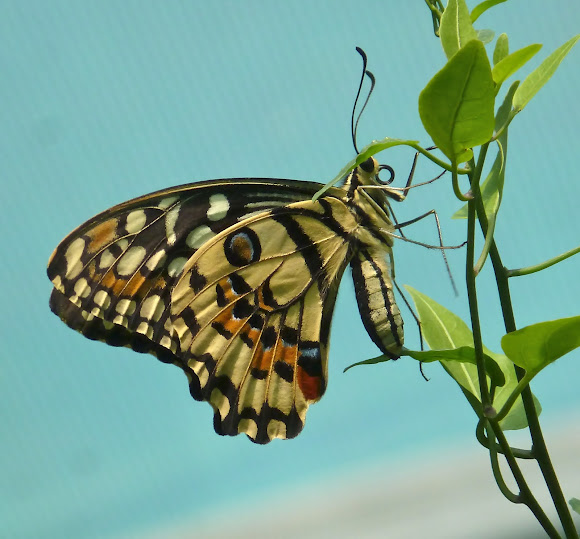 Common names: Common Lime Butterfly, Lemon Butterfly, Lime Swallowtail, Small Citrus Butterfly, Chequered Swallowtail, Mariposa del Muerte, Dingy Swallowtail, Citrus Swallowtail. Papilio demoleus, the Mariposa del Muerte, is a common and widespread Swallowtail butterfly. It gets its common names from its host plants, which are usually citrus species such as the cultivated lime. Unlike most swallowtail butterflies, it does not have a prominent tail. On the upperside, the wings of the Lime Butterfly are black with large yellow markings. These form an irregular macular fascia running from the apex of the forewing to the mid-dorsum on the hindwing, and there is a series of yellow submarginal spots on both wings. At the bottom of the hindwing (space 1b) is a red spot with an anterior narrow blue lunule. As for the female, this blue lunule forms the anterior portion of a large black circular spot above the red spot. The underside is predominantly yellow with a series of reddish post-discal bars on the hindwing. It is a strong flyer with a rapid erratic flight.

Papilio demoleus is an aggressive and very common butterfly. It is perhaps the most widely distributed swallowtail in the world. This butterfly is common in gardens wherever the host plants of the species, Citrus spp. are cultivated. The widespread range of Papilio demoleus indicates the butterfly's tolerance and adaptation to diverse habitats. It is to be found in savannahs, fallow lands, gardens, evergreen and semi-evergreen forests and shows a preference for stream and riverbeds. In India it is mostly found in the plains but can be found on the hills of peninsular India and up to 7000 feet in the Himalayas. It is common in urban gardens and may also be encountered in wooded country. The butterfly is also a very successful invader, its spread appearing to be due to its strong flight, increase in urbanisation and agricultural land use that opens up new areas for dispersal, and greater availability of foodplants.

Spotted in a tropical butterfly garden in S.E. France, on the French/Spanish border.

Pam, after a closer look I think they still both fit the description, in spite of small differences. The details on the red spot indicate they should both be female (see detailed description on wiki + following site:
http://butterflycircle.blogspot.ch/2008/...)
See what others have to say and whether the suggestion gets "+"!

Let me have a better look Pam...

Hi again Daniele. This looks the same as the spotting in Wiki, but this one:
http://www.projectnoah.org/spottings/123...
has different markings, and you labelled it the same. Is there a gender difference? Or is that one something else?

Hi Pam! I agree with annorion. Definitely not native to France, so thanks for mentioning it was seen in a butterfly park!

Lovely! This looks much like the species I collected caterpillars of today http://www.projectnoah.org/spottings/127... Although because of the range difference I'm sure its a related species. Do you know what kind of plant it was on?