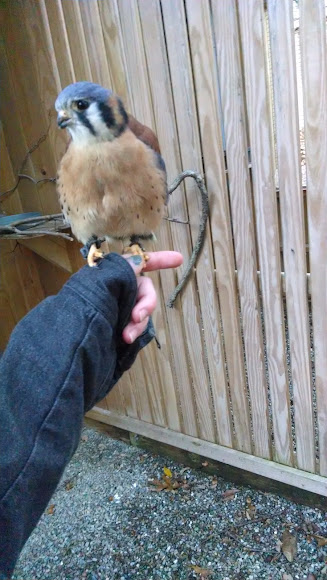 The smallest North American falcons, typically found near country fields, perched on fences or wires. They eat small mammals and insects. Males have bright plumage, typically blue, orange and red. Females are dulle more dull, with more browns and beiges. The barring on their cheeks is thought to help block/absorb distracting light rays when hunting.

This is Jove, an imprinted ambassador American Kestrel at my job at the nature preserve in Ossining, NY. He was found by a human as a hatchling and kept until he was confiscated and brought to Teatown. He is too friendly to be released and has beak problems due to malnutrition. In the second photo you can see the beak injuries, he is fed a special diet to assist these needs. I am incredibly sad to say that Jove passed away on the morning of December 17, 2013, just a few days after I took this picture of him. He died of old age and showed no earlier signs that he was ready as is typical with wild instincts. He ate a good meal followed by his usual feaking of his beak, chirping, and rousing his feathers to show his contentment and he then was able to sleep in a warm, dry, safe place for that night. He will be greatly missed and I'm proud of the beautiful photos I got of him while I had the chance. <3

It is good that there was a place to care for this one :)