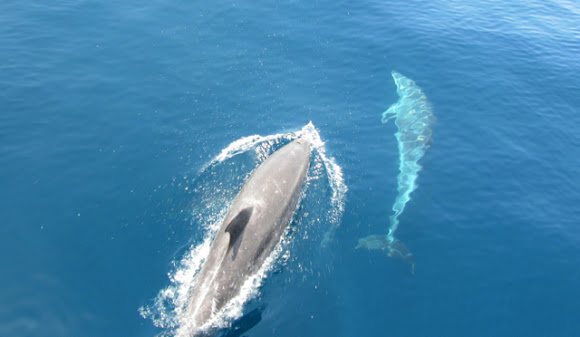 The common bottlenose dolphin is grey in color and may be between 2 and 4 metres (6.6 and 13 ft) long, and weigh between 150 and 650 kilograms (330 and 1,400 lb). Males are generally larger and heavier than females. The dolphins have a short and well-defined snout, that looks like an old-fashioned gin bottle, which is the source for their common name. Like all whales and dolphins, though, the snout is not a functional nose, which has evolved instead into the blowhole on the top of their head. Their neck is more flexible than other dolphins' due to 5 of their 7 vertebrae not being fused together as is seen in other dolphin species. (Wikipedia)

T. truncatus can be found in the warm and temperate tropical oceans worldwide

Photographed on a whale watching tour.

I sometimes see dolphins on our way to the islands before diving... but I always forget to take photos! :D

Thanks Gerardo! It was our first experience with dolphins and it was exciting!