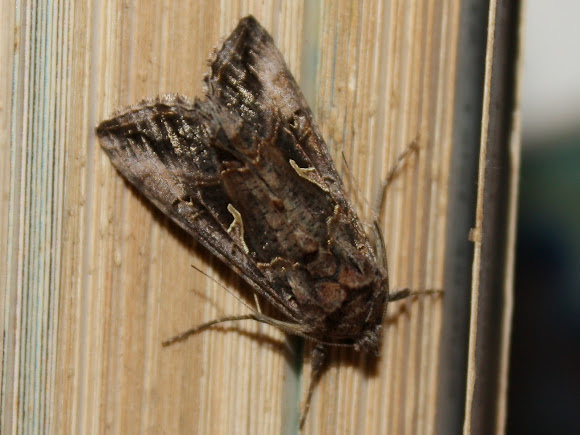 The Silver Y is a medium-sized moth with a wingspan of 30 to 45 mm. The wings are intricately patterned with various shades of brown and grey providing excellent camouflage. In the centre of each forewing there is a silver-coloured mark shaped like a letter Y or a Greek letter Gamma. There are several different forms with varying colours depending on the climate in which the larvae grow.

The species is widespread across Europe, parts of Asia, and North Africa[citation needed]. It is resident in the south of its range and adults fly almost throughout the year[citation needed]. In spring variable numbers migrate north reaching as far as Iceland, Greenland, and Finland with huge invasions taking place in some years[citation needed]. A second wave of migrants arrives in the summer[citation needed]. In central Europe and the British Isles adults are present in significant numbers from May onwards with numbers dwindling in late autumn as they are killed off by frosts[citation needed]. Some individuals fly south again to winter around the Mediterranean and Black Seas[citation needed]. It occurs in a wide variety of habitats, particularly open areas. It regularly visits gardens to take nectar from the flowers.

Silver Y moths can produce two or three generations in a year with a fourth generation when conditions are particularly good. The eggs are laid on the upper or lower surface of leaves. They are whitish in colour and hemispherical in shape with deep ribbing. They hatch after three to four days (longer in cool conditions). The larvae are about 30 mm long, have three pairs of prolegs and are usually green with whitish markings. They feed on a wide variety of low-growing plants and have been recorded on over 200 different species including crops such as the garden pea (Pisum sativum), sugar beet (Beta vulgaris) and cabbage (Brassica oleracea)[citation needed]. They can reduce crop yields by damaging leaves and are often considered to be a pest. The pupa is green at first, gradually darkening to black. The adults mate one or two days after emerging from the pupa and start laying eggs one to five days later. They die three to nineteen days after emergence. spotted yesterday nigth inside my house,not in the moth trap she was in a pocket calendar collection that we have and them in the fire place bricks

Noctuidae, Plusiinae, Autographa sp. and most probably Autographa gamma, the most common migrant moth in Europe. Need to be verified from Portugal. There are some other species around. But I am quite confident with this one.

i dont know Emma i'am realy a zero on moths :)
this week i only will post moths :) i have to began to understand a bit about these gorgeous creatures a completly new world to me :)

Could be one of the "Snout Moths" ?