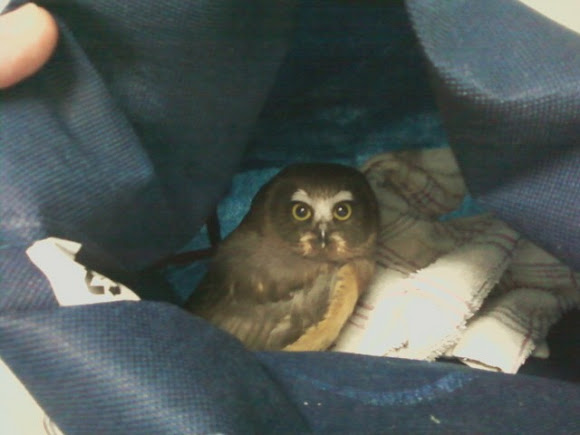 From Wikipedia: The scientific description of one of the sub-species of this owl is attributed to the Rev. John Henry Keen who was a missionary in Canada in 1896. Adults are 17–22 cm (6.7–8.7 in) long with a 42–56.3 cm (17–22.2 in) wingspan. They can weigh from 54 to 151 g (1.9 to 5.3 oz) with an average of around 80 g (2.8 oz), making them one of the smallest owls in North America. In relative size to other owls they are close to the size of an American Robin. The Northern Saw-whet Owl has a round, light, white face with brown and cream streaks; they also have a dark beak and yellow eyes. They resemble the Short-eared Owl, because they also lack ear tufts, but are much smaller. The underparts are pale with dark shaded areas; the upper parts are brown or reddish with white spots. They are quite common, but hard to spot.

I saw this owl at the vet when I was taking my cat in for a checkup. I don't remember what was wrong with it, might have been a broken wing or something.