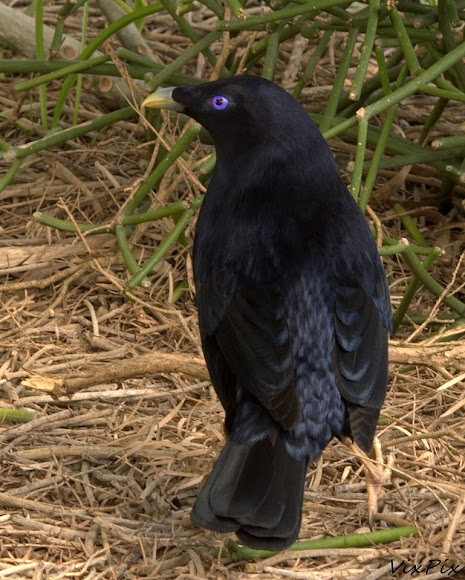 ......Both male and female satin bowerbirds have bright lilac-blue eyes, but here the similarities end. The mature male satin bowerbird is about 30 centimetres long, and his plumage is black with a glossy purple-blue sheen. Until he moults into this plumage during his seventh year, his plumage resembles that of the female. .....The female is slightly smaller, and is coloured green, grey-green, dusky brown and dark brown. Her underbody is buff to cream, marked with dark olive-grey to dusky grey crescents.

The satin bowerbird lives in rainforests and the edges of drier forests on the coast and adjacent ranges of eastern Australia. It is found from Cooktown in Queensland to near Melbourne, in Victoria. During autumn and winter, satin bowerbirds leave their forest habitat and move into open woodlands to forage for fruit, leaves and insects. However, with the arrival of the spring breeding season they collect together in small groups, inhabiting territories which they apparently occupy year after year. Each mature male bird protects and tends his own bower throughout the year.

Hi Vic, I see you figured out how to edit your spotting. Thanks so much for putting this wonderful series into Animal Architecture. This birds bower is beautiful.

Also ...his eyes are amazing :-)
Ava T-B i have joined mission but i cant figure out how to download my pics onto the spotting group ><

What a nice series...love those eyes!