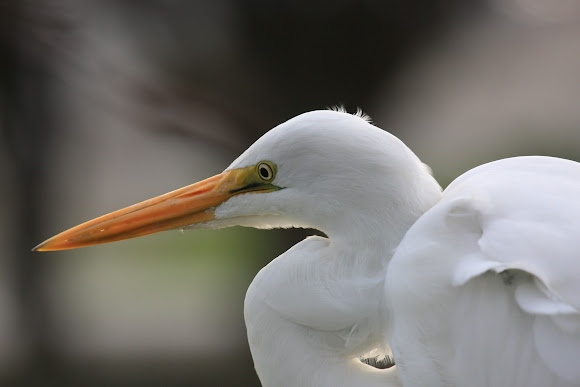 An Eastern Great Egret (Kōtuku). Whilst a fairly common bird worldwide, within New Zealand it is a highly endangered species. So, imagine my surprise when I saw this bird standing on a fence in a local front garden. I'm assuming that this is the specific bird which has been making waves in the local press in the last couple of months; where a photo of the bird from a distance made it onto the front page of the "Hutt News".

The diet includes vertebrates such as fish, frogs, small reptiles, small birds and rodents, and invertebrates such as insects, crustaceans, and molluscs. The Eastern Great Egret hunts by wading or standing still in shallow water and "spearing" prey with its bill.

The bird was only a few hundred metres away from the Waiwhetu Stream, Hutt River and Wellington Harbour so plenty of wet habitat nearby