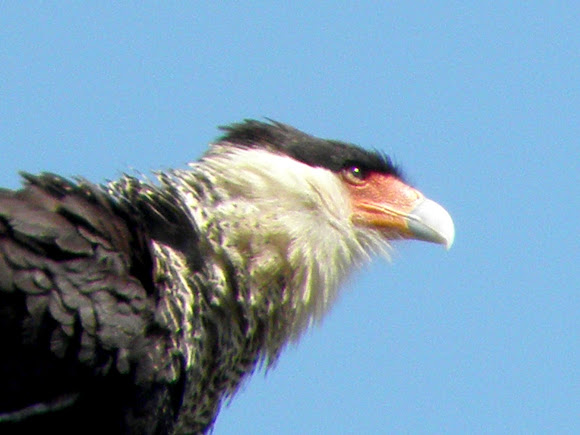 The crested caracara is a tropical vulture like member of the falcon family. This individual carcara has been living in Northern California, near the Oregon border for almost 5 years. This individual has been documented as far north as Brookings Oregon, although there is a record of an individual in British Columbia, Canada Sightings of this bird are sporadic, due to the mountainous and heavily forested terrain in this section of Redwood National Park. He seems to prefer a local gravel operation as his base, although has also been reported near the river mouth. Still it seems that he resides primarily in this area and is not responsible for sightings near Lake Berryessa near Sacramento, near San Francisco(whic could be the Lake B bird) or south near Santa Barbara. Global warming, natural evolutionary shift, or some other reason driving this species up the California coast

On a light pole near the highway, near a gravel pit, watching a newly hayed field

Having gone down in part to spot him, then headed further south, we were excited to see him at the edge of the highway on our way home. We watched for over 30 minutes snapping about 50 shots and half expecting him to fly. I think he was content to sit there until the equipt that was baling and wrapping bales had completed for the evening

Sergio: one of mine too. Our story of this bird is that we had just returned from Costa Rica, and were disappointed that we didn't see one(except fleetingly flying away into thick cover). 5 weeks after we returned home, we were in California, 2 hours from the Oregon border and saw this guy for the first time. http://www.projectnoah.org/spottings/897...
http://www.projectnoah.org/spottings/897...

Emma: we this this all the time during haying season. Turkey vultures gather around the field being hayed, hoping for something the combine killed. One year we saw 3 turkey vultures and a couple bald eagles fighting over the spoils. I was camera-less that day

Karen, great spotting of one of my favorite birds. Caracaras (like other raptors) often stay near fields that are being worked at, waiting for some mouse or snake that is uncovered.

Congratulations Karen for this thrilling spotting!!

Thank you, Ava. The topic (and the subject) intrigues me

Really interesting information about this species move North. And very nice pictures too.