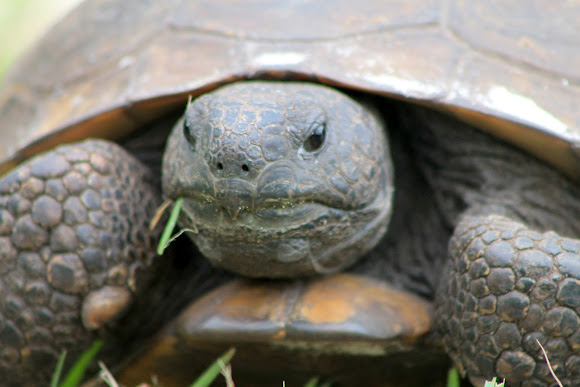 The gopher tortoise is a fairly large terrestrial turtle which possesses forefeet well adapted for burrowing, and elephantine hind feet. These features are common to most tortoises. The front legs have scales to protect the tortoise while burrowing. They are dark brown to gray-black in overall color, with a yellow plastron (bottom shell). A gular projection is evident on the anterior plastron where the head projects out from the shell. Sexual dimorphism is evident, with male gopher tortoises having concave plastrons, while those of females are flat. In addition, the gular projection on male plastrons is generally longer than in females. Carapace length can range from 20 to 30 cm (7.9 to 12 in), with a height (to the peak of the shell at the middle of the body) of 15–37 cm (5.9–15 in). Body mass averages 4 kg (8.8 lb), with a range of 2–6 kg (4.4–13 lb).[

Gopher tortoises like other tortoises of the genus Gopherus, are known for their digging ability. Gopher tortoises spend most of their time in long burrows, up to 14.5 metres (48 ft) in length and 3 metres (9.8 ft) deep.[7] In these burrows, the tortoises are protected from summer heat, winter cold, fire, and predators.[7] The burrows are especially common in longleaf pine savannas, where the tortoises are the primary grazers, playing an essential role in their ecosystem.[7] Except during breeding season, gopher tortoises are solitary animals, inhabiting a small home range. Within their range they dig several burrows. On average, each gopher tortoise needs about 4 acres (16,000 m2) to live

Gopher tortoises are herbivore scavengers. Their diets contains over 300 species of plants. They consume a very wide range of plants, but mainly eat broad-leaved grasses, wiregrass, and terrestrial legumes.[7][8] They also eat mushrooms,[7] and fruits such as gopher apple, pawpaw, blackberries, and saw palmetto berries.[8] In addition, gopher tortoises eat flowers from the genera Cnidoscolus (nettles), Tillandsia (Spanish and ball moss), Richardia, and Dyschoriste.[9] Juvenile tortoises tend to eat more legumes, which are higher in protein, and fewer grasses and tough, fibrous plants than mature tortoises.[9] Gopher tortoises have been known to scavenge carrion and eat excrement.[10] As gopher tortoises usually get water from the food they eat, they usually only drink standing water in times of extreme drought.[11] [edit] Burrowing Sexual reproduction involves courtship rituals between the male and the female tortoises. During the mating season between April and November, females lay their eggs in the open; about 1-25 eggs incubate underground for 100 days. The sex of the eggs is determined by the temperature where they are incubated in a nest laid below sand. If the sand is over 30 degrees Celsius, it’s a female and if below 30 degrees Celsius, the egg is a male. Incubation period can last from 80–90 days in Florida and 110 days in South Carolina. Gopher tortoises can live up to 40 years.[13] The gopher tortoise reaches maturity at about 10–15 years of age, when their shells are around 9 inches (23 cm) long.[10] They may mate from February through September, with a peak throughout May and June.[14] Females may lay clutches of 3-14 eggs,[14] depending on body size, in a sandy mound very close to the entrance of their burrow. Ninety percent of clutches may be destroyed by predators such as armadillos, raccoons, foxes, skunks and alligators[10] before the eggs hatch, and less than 6% of eggs are expected to grow into tortoises that live one year or more after hatching.[15]