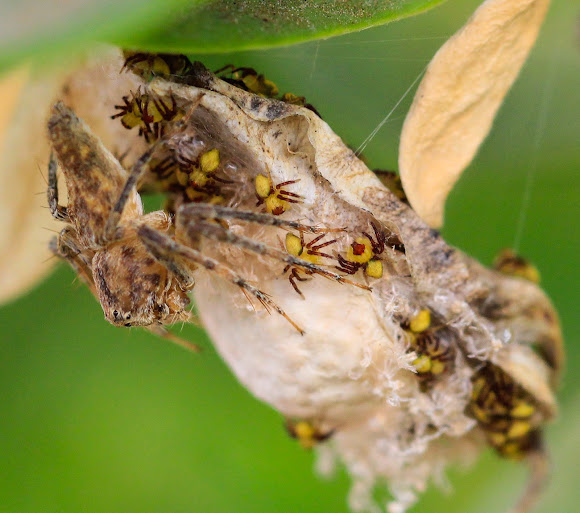 While often displaying very fine delicate features and an almost transluscent surface in popular photos, this female Lynx spider has a more robust grassland colouring. Easily identifiable by the raised mound on the prosoma containg the six eyes arranged around it and two less prominent eyes faceing forward below this. The common bristles on the legs can also be seen which is thought to help them in prey capture. These spiders are highy alert with good vision and tend to be fast runners and adept leapers, easily moving away from approaching predators and humans. This female was gaurding her egg sack and emerging young so she was a pleasure to photograph. Caution must be taken as some spiders are very defensive such as the Green Lynx Spider (Peucetia viridans) which sprays venom when the egg sack is approached. The distance of the spray has been noted at an impressive 300mm or 30cm (lenght of a ruler). At different times of the day the female would move to a nearby flower of the Myrtle-leaf milkwort (Polygala myrtifolia) on which her egg sack was constructed and wait in ambush for bees and other pollenators which were in abundance on the plant. This ambush tactic from flowers often gets lynx spiders confused with crab spiders

Varied and wide from open grassland to shaded gardens

Hi Tukup, Many thanks for the kind words. My first find of this kind. :)