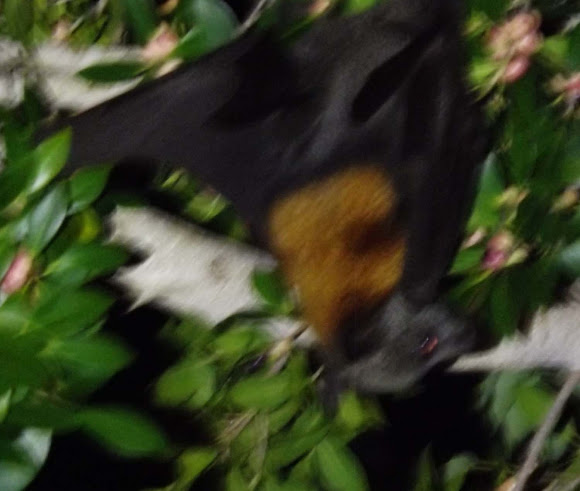 These mega-bats appeared a few days ago among the fruiting trees in the apartment block. There seem to be about half a dozen bats squabbling crashing about in the foliage. The tree is a Lillypilly I think and I have included some shots of it. They are in a nearby Date palm as well

I have no idea how to photograph a creature in the top of the tree at night, especially when they are flying off as I approach but if I can get a better one I will add it. I am a bit concerned about approaching these creatures as they carry viruses which can be 100% fatal to humans who catch them. Equally they are delightful and the opportunity to see them is a privilege http://en.wikipedia.org/wiki/Lillipilli

Yeah, I think this is as good as it gets unless I can get one to hand feed on a banana or something

Yeah I just tried to get a Podargus on a street wire in full darkness - impossible. I think you need a spot-light that would give an instant tan.