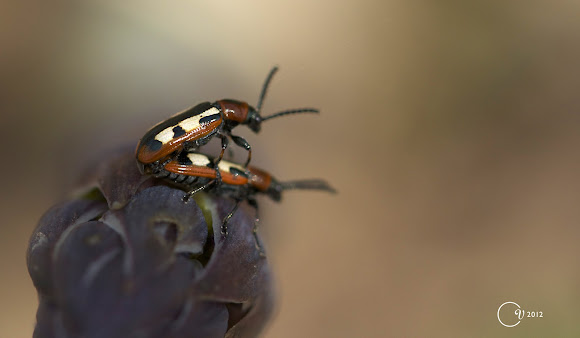 The Common Asparagus Beetle is a pest of asparagus crops in Europe and North America which feed only on asparagus. The beetle is about half a centimeter long, metallic blue-black in color with cream or yellow spots on its red-bordered elytra. The larvae are fat gray grubs with dark heads. The adult beetles and the larvae strip the needle-like leaves off the asparagus fronds, depriving the plants of the ability to photosynthesize and store energy for future years. They also chew the spears and lay generous amounts of eggs on them, making the crop unmarketable. The larvae feed on the plants for a few weeks, then drop to the ground to pupate. One year may see two or three generations of the beetle. The adults overwinter in a dormant state underground or in nearby leaf litter.

This is another example of "Caught in the Act"! Nice series Courtney

Nice series! It's great when species exhibit the behavior or habitat they're named after.

Those are nice beetles. I don't know about the aphrodisiac, beetle don't seem to need much encouragement LOL