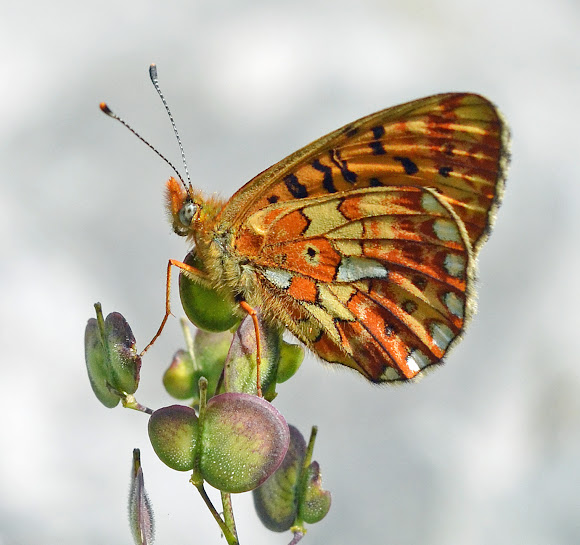 The beautiful Pearl-bordered Fritillary is orange with black markings on the upperside, and on the underside shows a row of silver pearly markings along the edge. It has declined rapidly in the UK and Ireland and is a highly threatened species in a number of European countries.

Alpine meadow, alt. 1500 m ASL. A picture of the habitat can be seen at http://www.projectnoah.org/spottings/127... Distribution: widespread throughout Europe, ranging from Scandinavia to northern Spain and from Ireland eastwards towards Russia and Asia. Find out more here: http://www.learnaboutbutterflies.com/Bri...

This butterfly can be confused with the Small Pearl-bordered Fritillary which can be found in the same habitats, but can be distinguished by the red chevrons along its pearl border (the Small Pearl-bordered has black chevrons) as well as the presence of a single silver spot in the middle of the central row of yellow spots. Wingspan of 38–46 mm. Its single broods appear mid May, early June. At higher altitudes as here they appear later in the year, into July. Spotted in La Pierreuse (meaning "stony place"), a nature reserve in the Swiss Alps.

Thank you peterb0, Pam and Shanna!

wonderful Daniele. Love the expression on its face!

Thank you all for your kind comments and congrats!

Brilliant! Congrats! All your spots are amazing Daniele!

Thanks Luis and surekha!

Congrats Daniele it is a great picture.

Thank you everyone for your kind comments!

Two beautiful captures, the first is very very nice. Congrats on having your spotting chosen for SOTD.

Absolutely beautiful! Congrats on the SOTD!

Awesome Daniele..! Congrats for the SOTD..:-)

and 63 other people favorited this spotting