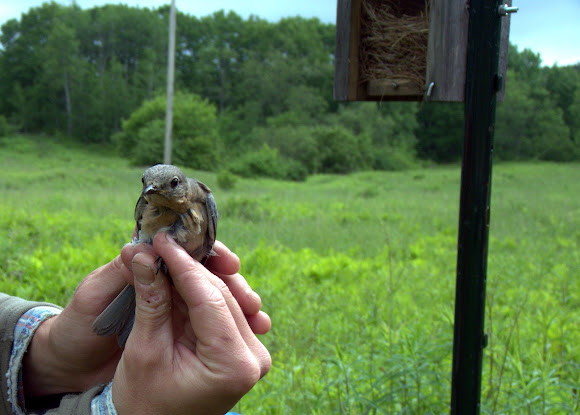 A small thrush with a big, rounded head, large eye, plump body, and alert posture. The wings are long, but the tail and legs are fairly short. The bill is short and straight. (allaboutbirds.org) Females are grayish above with bluish wings and tail, and a subdued orange-brown breast.

Eastern bluebirds prefer to nest in woodlands where cavity holes excavated by a previous species will serve as their home. These woodlands must be near clearings or meadows because this is the preferred hunting ground of the species. River or creek access is an added benefit and preferred. (wikipedia)

Approximately two-thirds of the diet of an adult eastern bluebird consists of insects and other invertebrates. The remainder of the bird's diet is made up of wild fruits. Favored insect foods include grasshoppers, crickets, katydids, and beetles. Other food items include earthworms, spiders, millipedes, centipedes, sow bugs and snails. (wikipedia) **Caught by BRI wildlife research biologists, as part of migratory bird banding and study. **