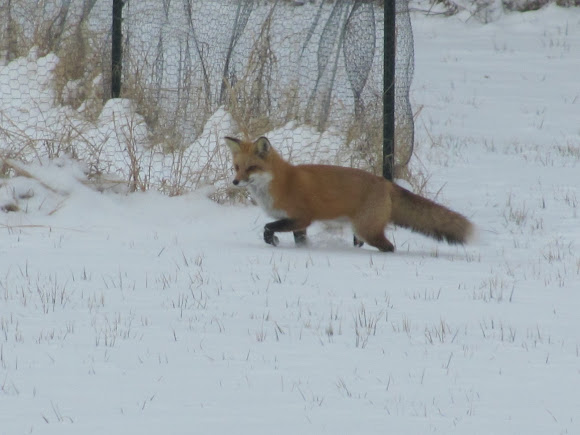 The red fox looks like a small dog with a long, pointed muzzle, long legs, large, pointed ears and a long, bushy tail. Total length ranges from 36 to 46 inches. Body weights vary from 8 to 15 pounds. The fur is usually reddish-yellow on the sides and slightly darker on the back. Its tail is nearly the same color as the sides but mixed with black and usually tipped with white. The cheeks, throat, and belly are whitish but the legs, feet, and backs of the ears are black. The pupils of a fox's eyes are almond-shaped rather than round. Red foxes aren't always red. Genetic mutations can cause different color phases which are common enough to have their own names. Silver foxes are black frosted with white; black foxes are black. Cross foxes have a dark brown band down the back and across the shoulders. Samson foxes have a woolly coat without guard hairs.

Red foxes use a wide variety of habitats but seem to prefer grasslands and other open areas, especially those along the edges of forests and woodlands. They make use of crop fields, but do much of their hunting in marshes, woodlands and brushy fencerows. Crop fields that are left fallow and allowed to grow over with grass and weeds are another favorite place to look for food. Reports of red foxes in urban and suburban areas seem to be more common in recent years, probably because coyote numbers are low and rabbits and rodents are abundant in these areas.

This fox was spotted hunting the perimeter of my garden plot. Best I can tell he caught a mole.