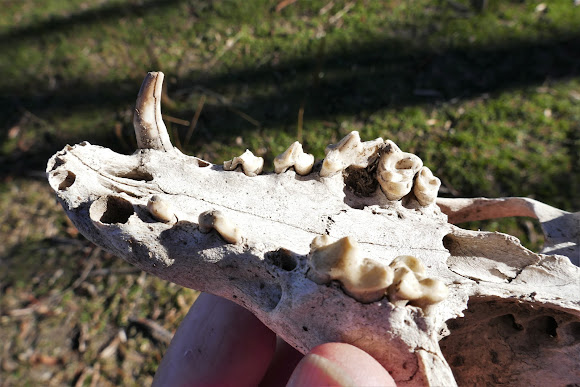 I thought I had stumbled across a dog skull at first. Finding animal remains on a farm is not uncommon, and feral dogs are a major issue in this country, including rural areas where they are a threat to livestock (calves, lambs and chickens in this case). On this farm, aerial dog baiting is a common practice https://www.dpi.nsw.gov.au/content/archi... and dogs are shot on sight! It's as simple as that! So finding a skull is no big deal, although I had no idea at the time that I had found the remains of something a tad more exotic, albeit equally as destructive and despised - a red fox. It's a species that poses a serious conservation problem in Australia, and 2012 estimates indicated there were more than 7.2 million red foxes (Vulpes vulpes) in this country and growing, with a range extending throughout most of the continental mainland.

The New England District of the Northern Tablelands, NSW. Rural landscape (sheep and cattle farm), but large areas of natural bushland vegetation also. At the time of this spotting, drought conditions were prevailing and Yoongan Creek was completely dry. This is where I found the skull, but whether this animal had died here or the skull had washed down from further upstream is unknown.

The images I used to ID this spotting - http://skullbase.info/skulls/mammals/red... Unfortunately, no mandible was found (as was also the case with my koala skull spotting). Skull size and shape is important and certain characteristics stand out, particularly now that I have done comparisons and understand what I'm looking at. However, once again and it's the teeth that have helped me settle on an exact ID. An excellent image here too plus interesting information on animal dentition - https://infinitespider.com/animal-skull-... The distance between the incisors, canines and molars, called the 'diastema' (plural diastemata), also became obvious as it's usually quite small in carnivores. Red fox teeth are quite distinctive, not only their shape and placement but also the spaces between then. This is definitely a red fox skull! Finally, I did notice that this animal was missing its top right-side back molar (4th photo). It's not there now and I doubt it ever was, or maybe this was a juvenile animal and the tooth hadn't yet erupted? It hardly matters now.