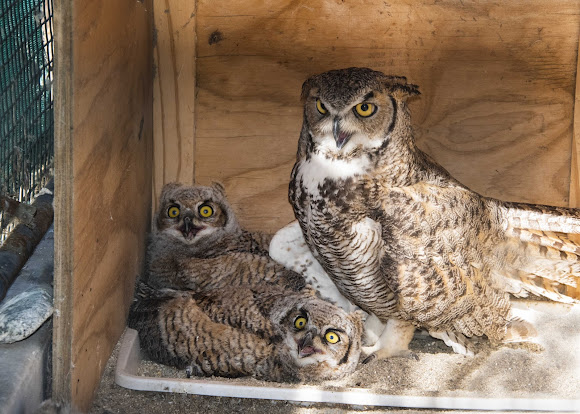 This is the heart-warming story of Ulie, a great horned owl. As pictured (first above), Ulie is a female estimated at over 20 years old. A number of years ago, Ulie injured and lost a wing. She was rescued, and cannot be released back into the wild. She, however, is not wasting the rest of her life just perched and getting older. Ulie is a foster mom. As young rescued owlets are brought to the Coachella Wild Bird Center, they are placed with Ulie who is the first step in the process of raising and fledging them. She starts the process of teaching the early juveniles how to be an owl, and ultimately rejoin the circle of life in the wild.

Ulie is in an enclosure at the Coachella Valley Wild Bird Center. As stated on their online posting…"The Coachella Valley Wild Bird Center is a non-profit corporation created for the care and rehabilitation of orphaned, injured or sick native wild birds, with the ultimate goal of releasing them back into their habitats; to provide community education in the ways and needs of wild birds; to promote a deeper respect and understanding of the problems facing wildlife in an environment that is being altered by human activities.”

It is estimated that over the years Ulie has fostered over 300 young owlets. She has even gotten some outside help. Several years ago, she had a suitor named Bud. Bud was a wild great horned owl who roosted in a tree outside Ulie’s enclosure. He was reportedly also a rescued owl previously released into the area. Ulie during this time laid eggs, but she and Bud never touched. However, there certainly was a bond. Occasionally the caretakers found dead mice in Ulie’s enclosure, apparently dropped from above, and they believe Bud had something to do with it. Bud has since moved on, and Ulie continues to foster her young owlets. I would nominate Ulie for Avian Mom of the Year. To all Moms out there who strive tirelessly every day to mentor, tutor, and fledge their young…HAPPY MOTHER'S DAY!

Daniele, and all...many thanks for your comments, from both myself and Ulie!

Congratulations Jim on the SOTD. And Happy Mothers Day to Ulie.

And here we are on Mother's Day, with our perfect Spotting of the Day! Congratulations Jim!

"In many countries today is Mother's Day! On this day we want you to meet Ulie the Great Horned Owl (Bubo virginianus), the ultimate foster mum. Ulie is a rescued owl who has fostered over 300 young owlets over the years. Ulie was injured and lost a wing, and cannot be released back into the wild. Ulie lives in an enclosure at the Coachella Valley Wild Bird Center in Indio (California, USA). Young rescued owlets brought to the Center are placed with Ulie, who provides the first step in the process of raising them, fledging them, and ultimately let them rejoin the circle of life in the wild.
Thank you Jim Nelson for bringing us this heart-warming story. Read more about Ulie's story and see more images here: https://buff.ly/30e6waH
Project Noah has a special mission dedicated to wildlife and rescue rehabilitation, created by ranger Maria de Bruyn. Check it out here: https://buff.ly/2Je3nT3 "

Great fotos and story Jim. Thanks for sharing.

Neil, I added the Wildlife Rescue and Rehab Mission.

Sergio, that motherly/foster instinct seems to cross all species' boundaries.

Thanks to Ava, and all.

Great story Jim, and very nice notes. I have a cat that assumed the role of foster mother to two little kittens, but I didn't know that wild animals could do it too.

A fantastic and heartwarming story, Jim. Thank you for sharing Ulie's story. Beautiful photos and a pleasure to read. This would be an awesome inclusion in the Wildlife rescue and rehabilitation mission - https://www.projectnoah.org/missions/997...

Awww a very heartwarming story Jim. Thank you for sharing :)

Daniele, I have been away too long. Thanks to you and SukanyaDatta for your comments, and I have removed the Best Wildlife mission from this posting.

Wonderful Jim! Perfect for Mother's Day just ahead of us indeed :-)
FYI, the 2018 Best Wildlife Photo mission is over. There's a new mission for 2019, but it focuses on interactions between species:
https://www.projectnoah.org/missions/219...

What a wonderful story. May she long continue fostering...thank you for sharing.