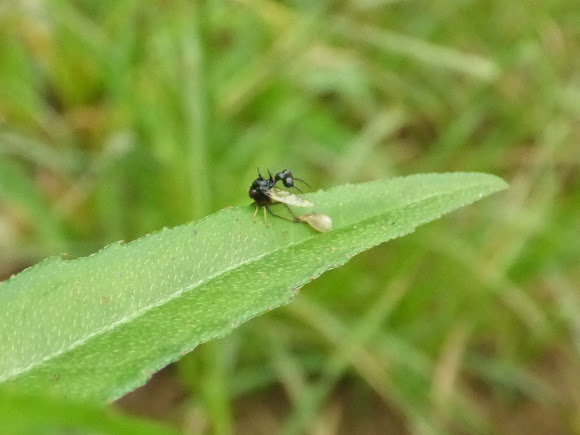 This beautiful insect has an extravagant camouflage mimicking two or three ants! it did fooled me as I though at first that I was taking a picture of ants eating a membracid.

Insectnewsnetwork.com says the following about Cyphonia clavata: "While many of the Membracid hoppers mimic plants (leaves, thorns, sticks, etc.) this species (Cyphonia clavata) is crazy cool because it lives among Cephalotes ants in central America, an aggressive species. When two of them meet face-to-face they look like two ants touching antennae. They can even mimick the smell of the ant colony. Membracids are exceptional examples of mutualism: two organisms of different species exist in a relationship in which each individual benefits. Some treehoppers have mutualism with wasps and even geckos, offering honeydew in return for protection. Many consider them to be the most exquisitely designed creatures in the world. In the past few years, treehoppers in South America have also been found to have a complex society which uses a distinct language to indicate fear, fun and reproductive frenzy."

They are truly awesome. I got to see a couple more but this time on the pacific side of the country. Once you know they exist you pay more attention.

Thanks Lauren! I even got to see two of them! they are awesome.

How lucky of you to get to see this one! Super!