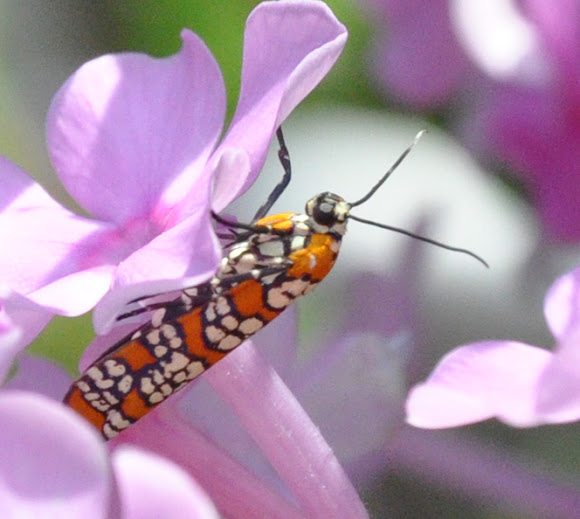 The Ailanthus webworm is thought to be native to South Florida and the American tropics (south to Costa Rica), habitat to its original larval host plants, the Paradise Tree (Simarouba glauca) and Simarouba amara. Another tree called Tree-of-Heaven (Ailanthus altissima), originally from China, has been widely introduced and Atteva aurea has jumped to this new host plant (giving it its common name, Ailanthus webworm). The moth does not survive cold winters, but migrates north each year so it is commonly seen in summer throughout the continental US, and occasionally eastern Canada (its northern limit in eastern Ontario and south-western Quebec beyond the host range). Forewing orange, with four bands of yellow spots outlined in black. Spots smaller in Florida population, which until recently was considered a separate species. Hindwing smoky gray. wingspan 18-30 mm

Ailanthus, common-name Tree of Heaven, is considered an invasive species, although it is still sold by nurseries as yard plant, mainly because it is one of the species that will grow in polluted or otherwise difficult places. Atteva aurea can be a minor pest in nurseries, although it rarely does serious damage.

Great photos. I have probably seen one but forget. I will look for these moths this summer though.

Ermine Moths
http://en.wikipedia.org/wiki/Ermine_moth... (family Yponomeutidae)
The family Yponomeutidae are known as the ermine moths, with several hundred species, most of them in the tropics. The larvae tend to form communal webs, and some are minor pests in agriculture, forestry, and horticulture. Some of the adults are very attractive. Adult moths are minor pollinators.