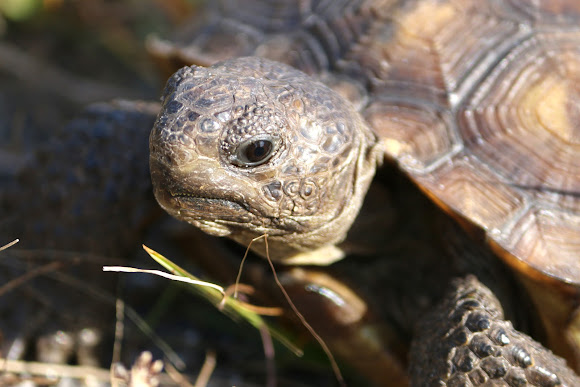 This particular tortoise scampered about quickly through the grass. It was shy and did not engage in head-bobbing, which is an aggressive behavior that precedes ramming its adversary. You can fit a juvenile gopher tortoise in your hands, but adults can weigh up to 15 pounds.

Tortoise was seen at Honeymoon Island State Park, a barrier island off the western coast of Florida. The gopher tortoise relies on areas with sandy soil (like the one pictured) and longleaf forests.

Longleaf forests are rare and declining. This tortoise is considered a keystone species due to its propensity for digging burrows that can house hundreds of other animals such as burrowing owls or indigo snakes. Gopherus polyphemus is threatened and listed as vulnerable by the IUCN because of habitat loss and predation.

Wonderful spotting! The first picture is an excellent shot!

Thank you, Tukup! I hope you find a tortoise too. Surely, you’ll outrun him! 😅

Great series Mauna. And great notes. Thanks for sharing. I'll be on the lookout for butting tortoises. I should still be able to outrun them :-)

Thank you, Neil! My pleasure. In the NatGeo article, someone describes how the tortoise tried to ward off a human by ramming the person’s leg lol. It’s cute aggression.

Wonderful spotting, muana. I really like its defense strategy. If it also involve lots of snapping, it's a winning combination. Thanks for sharing.