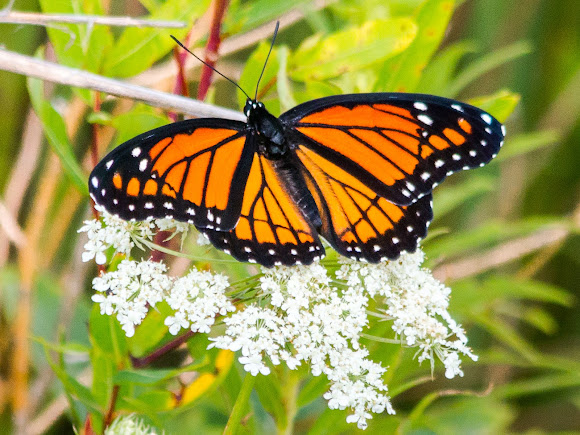 Its wings feature an orange and black pattern, and over most of its range it is a Müllerian mimic with the monarch butterfly (Danaus plexippus). The viceroy's wingspan is between 53 and 81 mm (2.1 and 3.2 in). It can be distinguished from the monarch by its smaller size and the postmedian black line that runs across the veins on the hindwing. In Florida, Georgia, and the American Southwest, viceroys share the pattern of the queen (Danaus gilippus) and in Mexico they share the pattern of the soldier (Danaus eresimus). In all three areas, the local Danaus population mimic the coloration of the viceroy species. It was originally believed that the viceroy was a Batesian mimic of the three other species, and presumed edible or only mildly unpalatable to predators, but this has since proven not to be true. In an experiment with both the monarch's and viceroy's wings removed, birds were discovered to think the viceroy was just as unpalatable as the monarchs.