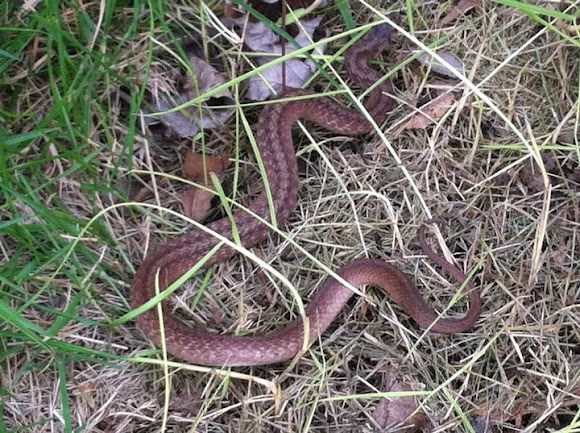 The Common Garter Snake (Thamnophis sirtalis) is a numerous snake indigenous to North America. Most garter snakes have a pattern of yellow stripes on a brown or green background and their average length is about 55 cm (22 in), maximum about 137 cm (54 in). The Common Garter Snake is a diurnal snake. In summer, it is most active in the morning and late afternoon; in cooler seasons or climates, it restricts its activity to the warm afternoons. In warmer southern areas, the snake is active year-round; otherwise, it sleeps in common dens, sometimes in great numbers. On warm winter afternoons, some snakes have been observed emerging from their hibernacula to bask in the sun.

The habitat of the garter snake ranges from forests, fields, and prairies to streams, wetlands, meadows, marshes, and ponds, and it is often found near water. It is a semi-aquatic animal like most snakes. It is found at altitudes from sea level to mountain locations. Their diet consists mainly of amphibians and earthworms, but also fish, small birds, and rodents. Garter snakes are effective at catching fast-moving creatures like fish and tadpoles. Animals that eat the Common Garter Snake include large fish (such as bass and catfish), bullfrogs, snapping turtles, larger snakes, hawks, raccoons, foxes, wild turkeys and domestic cats and dogs.

Found this beauty in my best friend's back yard near the Atlanta airport :)