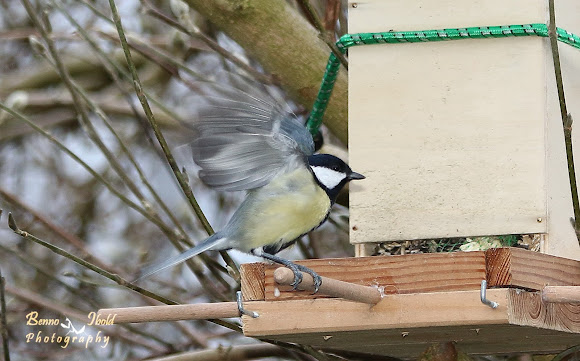 The Great Tit is a distinctive bird, with a black head and neck, prominent white cheeks, olive upperparts and yellow underparts, with some variation amongst the numerous subspecies. It is predominantly insectivorous in the summer, but will consume a wider range of food items in the winter months, including small hibernating bats.[2] Like all tits it is a cavity nester, usually nesting in a hole in a tree. The female lays around 12 eggs and incubates them alone, although both parents raise the chicks. In most years the pair will raise two broods.

The nominate subspecies of the Great Tit is the most widespread, its range stretching from the Iberian Peninsula to the Amur Valley and from Scandinavia to the Middle East. The other subspecies have much more restricted distributions, four being restricted to islands and the remainder of the P. m. major subspecies representing former glacial refuge populations. The dominance of a single, morphologically uniform subspecies over such a large area suggests that the nominate race rapidly recolonised a large area after the last glacial epoch.