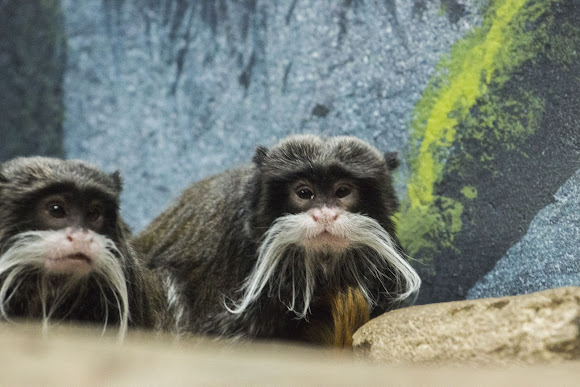 Distribution: Emperor tamarins are found in the southwest Amazon Basin. The countries of their origin are southeast Peru, northwest Bolivia, and northwest Brazil. River drainages in Peru such as the Acre, Purus, and Jurua have populations of emperor tamarins. Habitat: Emperor tamarins are found in various types of light, dry-bottom to terrestrial dense Amazon forests. There territories are found in areas with 75-100 acres of open woodlands. Emperor tamarins usually dwell in trees below 80-95 feet. Description: Emperor tamarins are usually between 9-10.5 inches in body length with a tail length of around 15 inches. They are very light animals weighing only about 10-14 ounces at mature age. There most distinct physical feature is their long, white, drooping mustache. The emperor tamarins usually have a black or dark grey coat with yellow coats on their back and a brownish-red chest and tail. Emperor tamarins have claws on all of their fingers and toes with the exception of the great toe, which has a nail. Diet: The vast majority of the emperor tamarins diet consists of plant matter. They are also known to eat fruit, tree sap, insects, and small vertebrates. Occasionally they will rob birds’ nests of their eggs. The types of insects they feed on include locusts, beetles, butterflies, spiders, and ants. The small vertebrates include lizards and tree frogs. The small size of the Emperor tamarin aids them in eating food that other large primates are unable to obtain. Behavior: Emperor tamarins are active during the day and are constantly moving. Due to their small size they are very agile and can move from branch to branch with great leaps and jerky movements. They are very playful, affectionate primates and when held in captivity love to be pet by humans. They are usually found in groups consisting of up to fifteen other members. Often the emperor tamarin is found living among other groups of emperor tamarins. Breeding: In an emperor tamarin group, several of the members are sexually mature. Usually the two oldest males and the oldest female are the members responsible for reproduction. The gestation period last 140-145 days; yielding usually two, sometimes 3 young. All of the males in the group father or not, aid the mother during the birth and care for the young long after. Emperor tamarins are sexually mature at the age of 16 to 20 months. Adaptations: Two-thirds of the female emperor tamarins are trichomats; they see three colors. This type of vision allows the females to have an easier time detecting ripe fruit. The rest of the females and all of the males are dichromats; they only detect two colors giving them an advantage detecting predators and prey which are camouflaged. Their light weight and small size allows them to get to the ends of branches and twigs where larger monkeys are not able to. Their stature also allows them to be quick, shifty "leapers" helping them catch their prey and escape from their predators. Their tail (which is longer than their body) acts a fifth hand by gripping branches. Emperor tamarins have much longer fingers than their relatives, which aid in the snatching of their prey rather than having to probe for trey in the trees. Their claws are believed to be an adaptation to their environment instead of a passed down trait of their phylogenetic ancestors. It is common for emperor tamarins to have a mutualistic relationship with saddleback tamarins. Emperor tamarins live in the higher levels of the jungle canopy and watch for danger from above. They also flush prey down to the lower levels for the saddlebacks. The saddleback tamarins in return offer protection to the emperor tamarins by detecting predators from below. Conservation: Emperor tamarins are considered to be endangered or threatened in Brazil and Peru, but in other areas of their terrestrial biome, however, in other areas the IUCN classifies their status as indeterminate. Logging by humans is the main reason they are in danger. Miscellaneous: Emperor tamarins were named after the Emperor of Germany, Emperor Wilhelm II, due to the long, droopy white mustache. Swiss zoologist Goeldi gave the species the name of "emperor" as a joke, however, the name stuck. Emperor tamarins have been known to live up to 20 years.