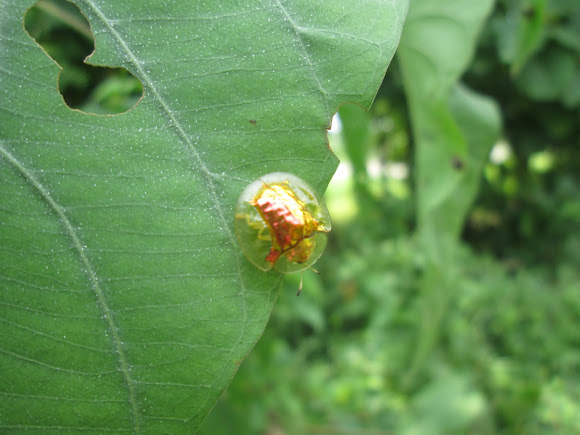 The golden tortoise beetle (Charidotella sexpunctata) is a species of beetle in the leaf beetle family, Chrysomelidae. It is native to the Americas. This beetle consumes foliage of bindweeds, morning glories, and sweet potato (all in the Convolvulaceae). Both adults and larvae feed on foliage.[1] This beetle's adults are 5 through 7 millimeters long. It is variable in color from reddish-brown with black spots through gold, and it is often metallic, earning it the nickname "goldbug".[2] Elytral margins are expanded and nearly transparent.[1] This beetle's color changes through its development, during mating, and during times of disturbance, such as touching by a researcher. Scientists have not examined the color-change mechanism in this species. However, color change in the related Panamanian Charidotella egregia, also called golden tortoise beetle, occurs when this beetle's elytra hydrate and dehydrate.[3] Adults of both species can turn from shiny gold through reddish-brown when disturbed.[4] Female Charidotella sexpunctata lay clusters of eggs on stems and on the undersides of host leaves. A spiny, yellowish or reddish brown larva emerges from its egg in 5 through 10 days. A larva accumulates its shed skins and frass on a structure called an anal fork, which it positions over its body as a fecal shield, evidently hiding the larva from predators. This is usually effective against smaller insect predators such as ants, but not larger ones, such as hemipterans. After two through three weeks, a larval Charidotella sexpunctata becomes a spiny brown frass-covered pupa, and in one through two weeks later it emerges as an adult.[1] Parasitoids of this species include the eulophid wasp Tetrastichus cassidus and the tachinid fly Eucelatoriopsis dimmocki. Other predators, especially of the larvae, include ladybird beetles, damsel bugs, shield bugs, and assassin bugs.[1] There are two subspecies, ssp. bicolor and ssp. sexpunctata.[5]