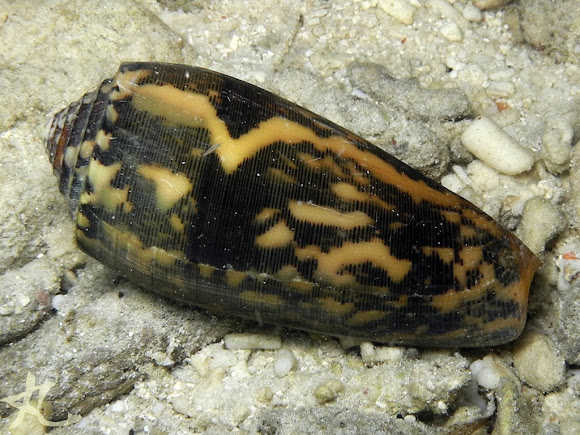 This mollusk has a large, slim shell that can grow up to 12cm long, with rounded shoulders, a pointed spire with deep sutures, and an outer lip with a pronounced posterior flare. Common coloration of this species is cream with brownish-purple blotches. The animal hunts and eats fish, and is often observed at crevices and caves, preying on sleeping fish. It is venomous and can sting humans.

This was a live one, which I spotted towards the last leg of a night dive at Dayang Beach. It was in shallow water, very close to shore (about 3m depth). I tried waiting for it to emerge from its shell, but I was already low on air and the surge was making me dizzy. You can see part of the mollusk's mantle in the 2nd photo.