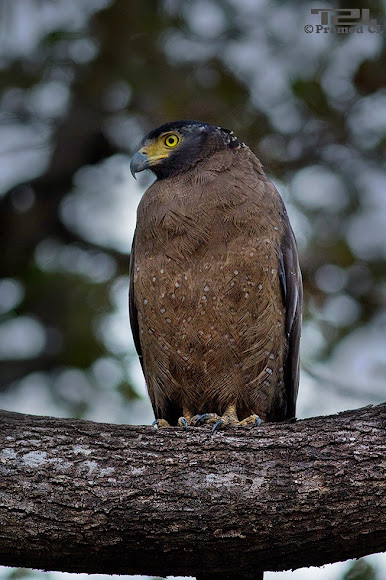 The crested serpent eagle (Spilornis cheela) is a medium-sized bird of prey that is found in forested habitats across tropical Asia. Within its widespread range across the Indian Subcontinent, Southeast Asia and East Asia, They fly over the forest canopy on broad wings and tail have wide white and black bars. They call often with a loud, piercing and familiar three or two-note call. They often feed on snakes, giving them their name and are placed along with the Circaetus snake-eagles in the subfamily Circaetinae.

This medium-large, dark brown eagle is stocky, with rounded wings and a short tail. Its short black and white fan-shaped nuchal crest gives it a thick-necked appearance. The bare facial skin and feet are yellow. The underside is spotted with white and yellowish-brown. When perched the wing tips do not reach until the tail tip. In soaring flight, the broad and paddle-shaped wings are held in a shallow V. T.