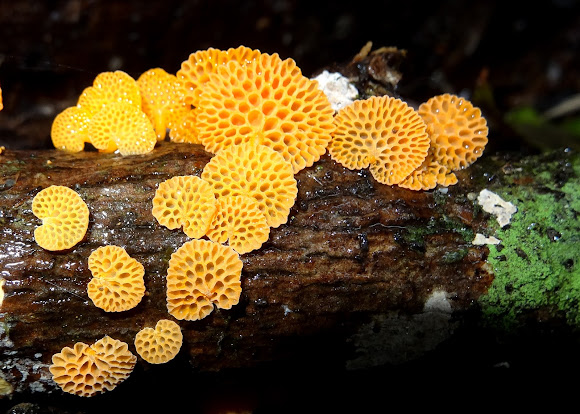 Unusual fungus is bright orange. Cap 5-20mm, kidney shaped with slightly dimpled dorsal surface. The ventral surface has pores or a honeycomb like appearance. The stem is short and also orange.

Found growing on a small log in native forest near Lake Karapioro in the central North Island of New Zealand.

Thought to have originally come from Africa, this species was first recorded in NZ in the 1960's and is now found throughout the country.

Thank you PN and all that commented on this spotting for the 2017 photo competition. I am sorry for the late acknowledgment but all your comments are most appreciated.

Congratulations, incredible detail for such a small fungi

ANOTHER CONGRATULATIONS to you - a GREAT spotting!!

Congratulations Robert, your Orange Poreconch is the winner of our 2017 Best Wildlife Photo competition, Fungi category:

Thank you Joshua and flowntheloop. Glad you enjoyed this spotting.

So beautiful! My eyes are in love!

Thank you Polilla and Antonio. Amazing the more I research this the more widespread I realize it is. It seems to tolerate a wide range of conditions.

Great spotting Robert,we have them in Portugal too,it's a invasive species that have been reported only a few times in Portugal,it's going to spread,lets hope that the beauty dont turn in a pest http://www.projectnoah.org/spottings/190... they are beautifull,congrats on the SOTD and thanks for sharing

Thank you for the comment Mark. Yes this fungus has spread very quickly. Our sympathies to those of you effected by cyclone Debbie. We have had severe flooding here over much of the North Island.

Thank you Daniele and PN for the SOTD. A most unexpected honour.

Good one Rob. It's frightening how fast this stuff has spread here. Congrats.

Congratulations Robert, these striking fungi are our Spotting of the Day!

Thank you for the comment arlanda. It was a soaking wet day these fungi just about glowed with that bright orange colour in the bush.

Thank you Bonnie, Joseph and Felix for your comments and support.

Nice one! The pattern on the undersides is fantastic.