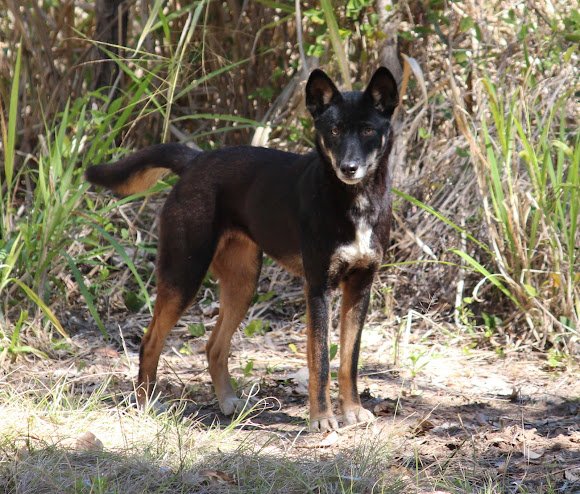 The Dingo is the only native dog in Australia. Believed to have arrived in Australia about 4000-6000 years ago, and were probably introduced through trading between Aboriginal people and Indonesians fishing in local waters. Australia's largest mammal carnivore. Golden yellow dingoes are found in sandy areas while darker black and tan dingoes are found in forests. They howl at night but rarely bark. Hunt alone or in packs. If dingoes are hand-fed, they become dependent on people. and can be dangerous. Never feed wild dingoes.- Oz Animals A medium sized dog. About 60cm high at shoulder.

Found in coastal areas, forest and open areas where there is plenty cover. This one was spotted along the track I frequent to find spottings. He looked at me, I looked at him, got one shot & he took off. It's the first time I've seen a dingo in this area.

Such a beautiful animal!

Thanks Alice & Ashish. Yes, I see Christiane has the one that is familiar to most Australians with a golden coat. I didn't even know black & tan ones existed until a few days ago. Learning something new every day :)

Oh, I didn't even realise! Thanks Argy. I was reluctant to put this spotting up, as the lady over the road thought she'd seen it before (as in a domestic dog). After a few inquiries, I've been reassured it is a Dingo :)

Sorry I didn't notice any spelling Leanne. I just thought you might want to distinguish these from all the other Canis lupus (wolves) and C.l-familiaris (dogs).

Thanks Argy. Sorry for my misspelling :)