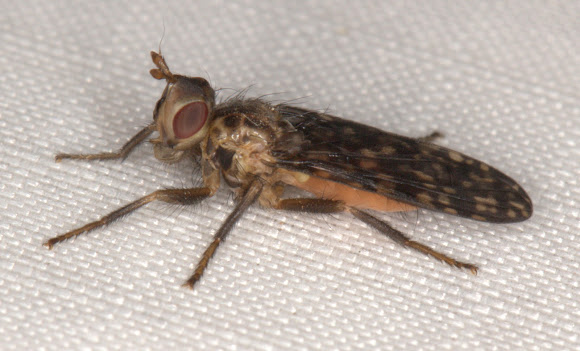 The fly was attracted to a UV moth light I set up in the back yard. This is one of three different Pyrgotidae that I have photographed here in the same location. When I searched for information on the fly I found an article where my own photos were used. Really weird to search for info and find yourself. See notes below.

The Pyrgotidae are an unusual family of flies (Diptera), one of only two families of Cyclorrhapha that lack ocelli. Most species are "picture-winged" (i.e, have patterns of bands or spots on the wings), as is typical among the Tephritoidea, but unlike other tephritoids, they are endoparasitoids; the females pursue scarab beetles in flight, laying an egg on the beetle's back under the elytra where the beetle cannot reach it. The egg hatches and the fly larva enters the body cavity of the beetle, feeding and eventually killing the host before pupating. In the United States, some species of Pyrgota and Sphecomyiella can be quite common in areas where their host beetles (typically the genus Phyllophaga, or "June beetles") are abundant. Like their host beetles, these flies are primarily nocturnal, and are often attracted to artificial lights. (https://en.wikipedia.org/wiki/Pyrgotidae...)